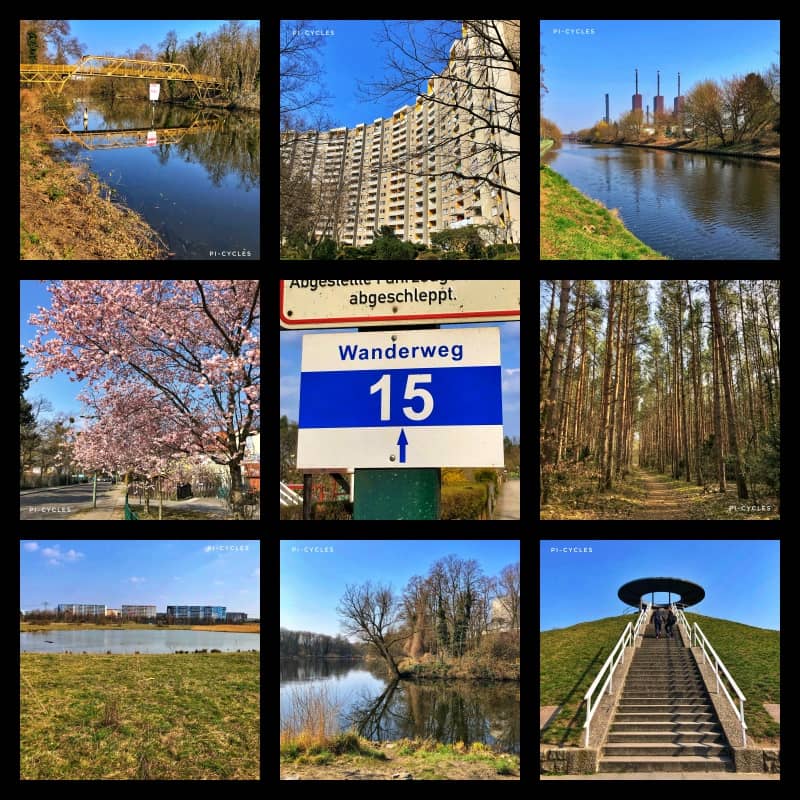 After what must be the longest break (four months) in a Grand Tour, I was back on the trails for Stage 15 of the Grand Tour de Grüne Hauptwege. While the days during the winter months were too cold and short for a Grand Tour Stage, I did manage to cycle outside about once a week. I focussed on getting new kilometres for my Wandrer profile, managing to add over 600 new kilometres. I also zwifted quite a bit too. I find it a great option to stay active especially over the cold and dark winter months.

The end of March 2022 was gloriously sunny and I picked a day where I could even ride in short sleeves and shorts for this Stage. The route for Stage 15 would take me through various districts in the south of Berlin, these districts being separate villages on the Teltow plateau before being incorporated into Berlin in 1920. This route has a similar origin to that of Stage 13, where I cycled through the Berlin districts on the Barnim plateau in the north of Berlin.

Before I could head out towards the start of the route, I prepared myself (and my blood glucose) for the long day in the saddle by having my usual breakfast of porridge and coffee. I reduced both my basal and bolus insulin – taking into consideration that I had cycled on Zwift the day before and the many hours of cycling ahead of me. With all that done, I headed out towards the beautiful Krumme Lanke lake in the Grunewald forest.

From this starting point in Zehlendorf, I cycled southwards towards the border between Berlin and Brandenburg. The lovely Waldsiedlung Zehlendorf (Zehlendorf Forest Estate) built in a modernist style between the World Wars is always a treat to visit. I do wonder why it didn’t make it into the Siedlungen der Berliner Moderne – I visited these estates previously.

Some nice trails next to the ditches and old train tracks led me towards the part of the Berliner Mauerweg (Berlin Wall Trail) at Kleinmachnow in Brandenburg. The small lakes along the way were showing the first signs of spring with the early blooming trees in full glory.

I reached the Teltowkanal (Teltow Canal) – it will feature prominently in a future Stage of this Grand Tour – and cycled along its banks. I also discovered a lovely bridge to cross the small Zehlendorfer Stichkanal (Zehlendorf Branch Canal) tributary. The surrounding area is very industrial but also popular with birdwatchers. In fact, I came across two people armed with cameras to observe the birdlife here.

I followed the Teltowkanal until I could cross to the opposite site – with a bonus sighting of the Lichterfelde Heizkraftwerk (Lichterfelde Thermal Power Plant) – so I could make it a longer section of the Berliner Mauerweg. This stretch of the Mauerweg is famous for the cherry blossoms that were donated by a Japanese TV station. Just as when Nadja and I visited them last year, it was too early for their full glory. But that didn’t deter me from enjoying this lovely part of nature by having a homemade flapjack in the sun.

Next up was the Lilienthalpark (Lilienthal Park), this is a lovely little park that memorialises Otto Lilienthal. He was a pioneer of flight by performing many flights with gliders, including some from the artificial hill that he made in 1894 in this very park for this purpose. The park was then dedicated to his memory in 1932 including a memorial at the top of the hill.

I left Lichterfelde for Marienfelde and followed some of the same trails as in Stage 5 of this Grand Tour. The highlight was the lovely Freizeitpark Marienfelde (Marienfelde Leisure Park) even though I managed to cycle into a stray branch of a large bramble. This left some very impressive scratches on my arm!

Next up was a quick dash across the Lichtenrade district towards the Berliner Mauerweg once again. Here I reached the end point of Stage 10 and unlike that ride, I did not lose my sheep mascot! Timmy the sheep was still safely in my bag. The route let me through Buckow and a small hop along the large allotment gardens in Britz that I had visited in Stage 10.

Once through Britz, I made it to Gropiusstadt. This is a district that was built after the Second World War by the famous architect Walter Gropius – hence the name of the district. The large skyscrapers were designed with form and function in mind but with the Berlin Wall being put up in 1961, the plans had to be changed drastically. The high-rise blocks had to be made higher with less green space than originally planned since the estates couldn’t expand outside of the Berlin Wall. The U7 underground line was extended at the same time as the residential blocks were built – urban planning in one go, to meet the demands of rebuilding Berlin after the war.

Rudow was next up and the route follows the pretty Rudower Fließ (Rudow Stream) that flows through the district. There were plenty of stables and farms in this area – even spotted some sheep! I once again followed the Berliner Mauerweg towards the Massantenpfuhl (Massante Pond). This lovely area was full of geese that had made it back to Berlin after their winter migration travels. There are usually water buffalo too but none during this Stage – maybe it was too early for them.

It was time for more food so I stopped for an energy bar and enjoyed the contrast of the nature park and the large Plattenbaus in the Altglienicke district. On my way northwards back to the Teltowkanal, I came across a friendly cat! I gave the cat a quick stroke before it strutted away.

The final point of the route was in the Spindlersfeld quarter at the Spree. From here I cycled back home through some very sandy stretches – I even came across multiple fire trucks that were stuck in this sand! A strange sight indeed but other than that it was plain cycling home.

This was a great ride where I could enjoy the first signs of spring in Berlin. It’s hard not to have a smile on your face when the sun is out after winter. My blood glucose was also pretty well behaved too – an added bonus! Hopefully the weather will continue to improve so that I can tackle the next Grüner Hauptweg.

The % distance I cycled in each district
Tags:AdlershofAltglienickeBerlinBiesdorfBritzBuckowCharlottenburgFriedrichsfeldeFriedrichshainGrand Tour de Grüne HauptwegeGropiusstadtGroßziethenGrunewaldJohannisthalKarlshorstKleinmachnowKöpenickKreuzbergLichtenradeLichterfeldeMarienfeldeMitteNiederschöneweideNikolasseeOberschöneweideRudowRummelsburgSchönefeldTeltowTiergartenWestendZehlendorf