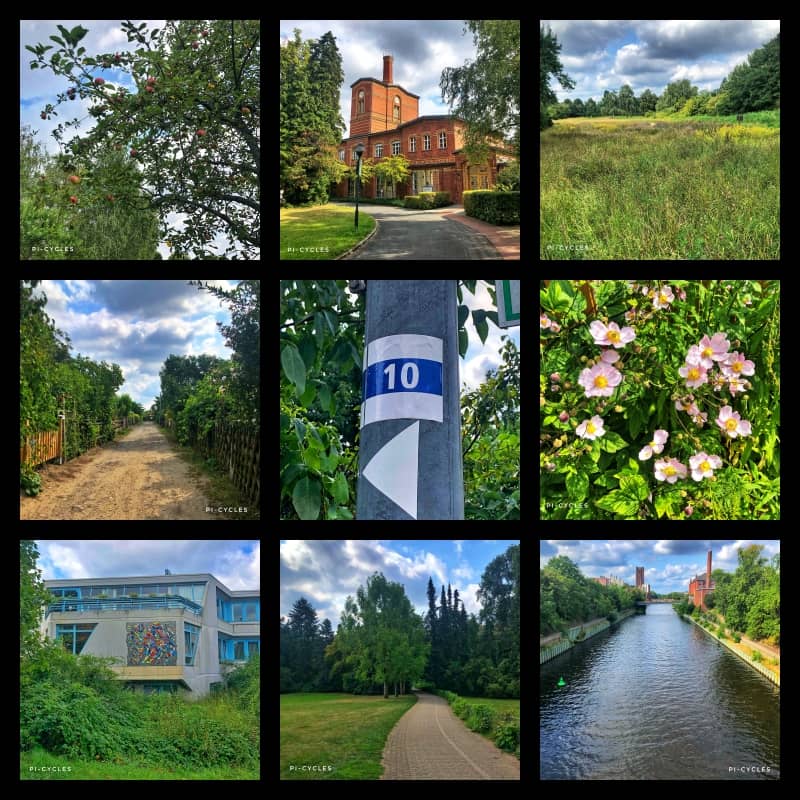 A muggy day before a longer stretch of terrible cycling weather hit, was a halfway-decent perfect opportunity to reach the midway point of the Grand Tour de Grüne Hauptwege. This shorter route would take me southwards from Tempelhof, south of central Berlin, towards Buckow and the border with Brandenburg.

As usual, I prepared myself with a slight reduction in both basal and bolus insulin. I didn’t bother with sunscreen as I was expecting an overcast day with lots of cloud cover. Once I was ready to head out, I cycled towards Alt-Tempelhof which was the historic village green back when Tempelhof was its own village and not part of Berlin.

The Franckepark was the first green area of this route. It is a lovely park with great paths for both cyclists and pedestrians/runners. The area around the small pond (Francketeich) was rewilded in 2018 when a deer enclosure was removed and natural greenery and wildlife was allowed to return.

The Eva-Maria-Buch-Bibliothek, one of the libraries in Tempelhof, borders the Franckepark. This modern building was renamed in 1993 after Eva-Maria Buch, a resistance fighter against the Nazis who was guillotined in Plötzensee Prison in 1943 at only 22 years of age.

Before I crossed the Teltowkanal (Teltow Canal), I made a detour to the Wenckebach-Klinikum (Wenckebach Hospital). The hospital was originally a military hospital built in the 1870s. The historic brick buildings are really impressive.

I crossed the Teltowkanal using the Colditzbrücke (Colditz Bridge) where there were some great views towards the Ullsteinhaus (Ullstein House). When this was built in the 1920s, it was the tallest building in Germany all the way up till 1957!

I was now in the Mariendorf district of Berlin and cycled through the first of many allotment gardens. These large areas are very dense with small houses surrounded by their huge gardens, many of which grow their own vegetables as well as very impressive flower arrangements. It can be pretty creepy being the only cyclist in these gardens – you get some strange looks from the people – but a friendly “Hallo” seems to do the trick.

The route goes around the Britzer Garten (Britz Garden), which was opened in the 1980s as part of the Bundesgartenschau – the federal horticultural show in Germany.  This is the location of the Britzer Mühle (Britz Mill) that I visited during the Berliner Mühlenrundfahrt. Entrance to the garden requires a paid ticket so I continued on the route through another huge allotment garden towards Buckow.

The final stretch of the route was through a lovely little orchard between residential houses and the border of Buckow and Brandenburg. The Berlin Wall ran along the border before it was torn down. Hence, the path of Berliner Mauerweg (Berlin Wall Trail) is also found here and there are some lovely large green stretches for people to explore.

I was feeling quite hungry at this point and my blood glucose could use a carb boost, so I ate an energy bar before cycling back home. At this point, I also noticed that I had lost my Shaun the Sheep mascot! I had no idea when this happened so I couldn’t just go back and retrieve my sheep.

I took quite a detour on the way home to take in some new kilometres and explore more of these southern districts of Berlin. This route really showed how many green areas are available even in the heavily residential districts of Britz and Buckow. Despite the allotment gardens not exactly being the most public friendly – but maybe that’s just my impression.