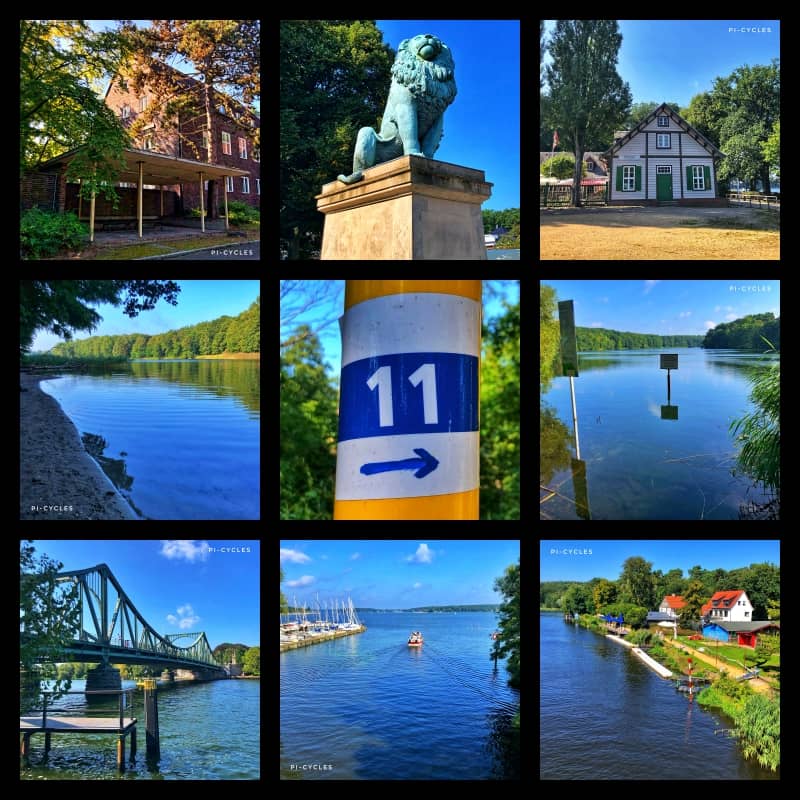 The days after the previous Stage were pretty cold and rainy, so not exactly cycling friendly, but eventually a sunny day cropped up for another Stage. Great timing too as this would be the last chance before Nadja and I would go to Malta for a two week holiday. This Grüner Hauptweg would take in plenty of lakes including part of Wannsee, one of the larger lakes in Berlin.

Before heading out, I needed to prepare my body for the long day of cycling ahead by reducing my basal and bolus insulin, on top of having a decent breakfast. Once I was ready, I headed out towards the start of the route at the top of the Koenigssee (King’s Lake). Right before reaching the start, my CGM alerted me that my blood glucose was dropping so I had an energy gel before carrying on.

I used the wonderfully named Hasensprung (Bunny Jump) bridge that runs over a small ditch that connects the Koenigssee to the Dianasee (Diana Lake). The Dianasee is named after the Roman goddess of hunting, the moon, birth as well as protecting women and girls – quite the CV! The next lake was the Hundekehlesee (Dog’s Throat Lake), probably named after all the hunting dogs that historically were kept for the hunting parties that were held in the area.

These three lakes are not only picturesque for hikers and cyclists to admire but they are also surrounded by plenty of huge villas. Many of which have direct access to the lake. I have picked out one at the Hundekehlesee for Nadja and myself to move into. I think we could then easily add many more cats and bicycles than we currently have in our apartment.

I cycled further into Grunewald and soon came to the Grunewaldsee (Grunewald Lake). The surrounding area is part of a nature reserve and there is a separate part where dogs are allowed off-leash. Knowing this, I was especially careful not to get in any scrapes with dogs or their owners!

On the way to the next lake – Krumme Lanke (Crooked Flank) – I really enjoyed the quiet of the forest. Once I reached the Krumme Lanke, I helped an older woman who seemed a little lost. She had taken a wrong turn and didn’t mean to get to this lake. I pointed her in the right direction and wished her a pleasant ride.

The Krumme Lanke and the neighbouring Schlachtensee (Battle Lake) are two of the most popular swimming lakes in western Berlin. There were a small number of people swimming in both lakes even on this chilly morning – very brave! The banks of the lakes are also usually full of runners and hikers but since this was a Friday in September, I avoided the masses.

I was now in the district of Nikolassee and cycled through the marshy Rehwiese (Deer Meadows) towards the actual Nikolassee (Nicholas Lake). There is no access to this lake as it is part of a water conservation area. This is also the final lake of the series of lakes called the Grunewaldseenkette (Grunewald Lake Chain). These lakes are part of a tunnel valley carved by glaciers between the Havel and Spree rivers.

I was now at the banks of the Großer Wannsee (Greater Wannsee), a huge lake formed by the river Havel. The lake is very popular for sailing, windsurfing, angling and many other water sports. I cycled past many sailing clubs and their marinas towards some lovely villas, including the Liebermann Villa. This was the summer residence of the German painter Max Libermann. He was an important painter and head of the Prussian Academy of Arts before being dismissed by the Nazis due to his Jewish heritage. The villa is now a museum and has a little Café too.

Once I reached the magnificent copy of the Flensburger Löwe (Flensburg Lion), I decided for a food and coffee break. I ate an energy bar and had an energy gel with my coffee while I enjoyed the lovely views across Wannsee towards the Strandbad Wannsee (Wannsee Beach Lido).

I left the villas of Wannsee for more forests and small swimming spots at Wannsee. The Berliner Mauerweg (Berlin Wall Trail) also links up to this Grüner Hauptweg. There were more palaces built by Prussian leaders to admire in this area. I think this gives an idea of how idyllic this area is – lakeside views and large dense forests.

The Grüner Hauptweg carried along the banks of the Teltowkanal (Teltow Canal) before crossing the Griebnitzkanal (Griebnitz Canal), a little offshoot that leads into the Kleiner Wannsee (Lesser Wannsee). This was the end of a thoroughly enjoyable Grüner Hauptweg!

Since this was a lovely day to be outdoors, I meandered back home taking in more forest paths and plenty more new kilometres for my wandrer.earth score. I was really looking forward to this route as it takes in some of the best nature that Berlin has to offer – the lush Grunewald forest and its many lakes, plus the Wannsee lake is always lovely. Next up is a good rest in the warmer Maltese climate before I can take on another Stage.