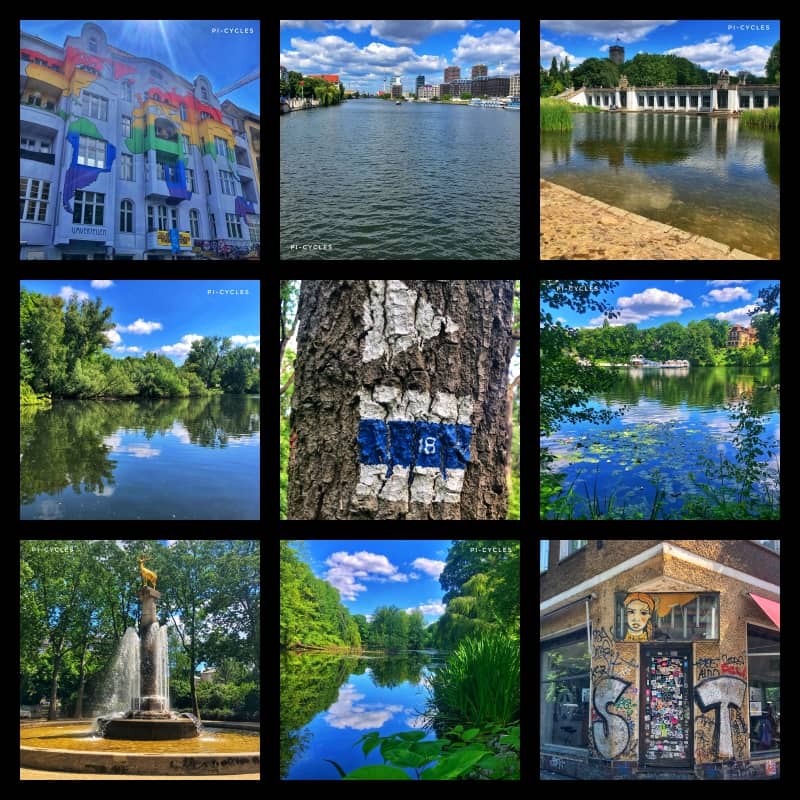 I needed some rest days after the strenuous ride of the last Stage. Since my blood glucose with the new automated insulin delivery system that I am using to manage my Type 1 Diabetes was all over the place when cycling, I reached out to my diabetes clinic for some tips on how to improve this. After this meeting, I had some new variables to test that will hopefully lead to stabler blood glucose when cycling.

The Stages at the tail end of this Grand Tour are shorter routes – ideal for testing out new insulin settings while taking in the greenery of Berlin. The route for this Stage would take me on a loop passing through many parks in central Berlin. This also meant I would not be travelling far to reach the start of the loop.

I headed out after breakfast, changed some sensitivity settings on Palpi (the algorithm determining my insulin needs – check out the previous post for the name 🙂 ) and cycled towards the beautiful Schlossgarten Charlottenburg (Charlottenburg Palace Garden). Nadja and I take many walks here and it is our go to place to take people who visit us as it’s such a lovely park. It’s full of huge trees, flowers, birds, squirrels and even sheep in the summer.

From here, I cycled towards another lovely park – the Volkspark Jungfernheide (Maiden Heath Public Park). Along the way, I glimpsed the Großsiedlung Siemensstadt from the Siedlungen der Berliner Moderne (Berlin Modernism Estates). The huge trees in the park damp out the sounds of the nearby Autobahn so much that you almost forget it’s there!

Getting to the next park – Volkspark Rehberge (Deer Mountains Public Park) – involved crossing over and under bridges that run right next to the Autobahn. I cycled next to the Berliner-Spandauer Schifffahrtskanal (Berlin-Spandau Shipping Canal) and even came across an American Football pitch.

I cycled through Wedding and headed towards the very circular Schäfersee (Shepherd Lake) – named after a nearby sheep farm from the 18th Century. A very pretty lake with lots of trees nearby, although the unfiltered runoff from the nearby (busy streets) has made the lake biologically dead from the depth of 2.5 m.

I carried on eastwards towards the lovely district of Pankow and cycled under Bösebrücke (Böse Bridge) which was where the Berlin Wall was first crossed in 1989. Now I was on the picturesque streets of Prenzlauer Berg and heading southwards about to cross the river Spree. I crossed using the always impressive Oberbaumbrücke (Over Tree Bridge) which also gives lovely views towards central Berlin. This section forms part of the Berliner Mauerweg (Berlin Wall Trail).

It was time for a food break, as I was getting a little peckish. I found a nice stop in the shade along the Landwehrkanal (Land Army Canal) and ate an energy bar. My blood glucose was a little high so I instructed Palpi to deliver a small amount of insulin. I was pretty happy with how steady my blood glucose was thus far though. The settings I changed before setting off seemed to have helped out.

I was also craving a coffee, so along my way through Neukölln I kept an eye out for a nice little Café at which to get one. As expected, this didn’t take long and I found one playing The Cure – a great bonus. Once I left the Café, I was reminded that cycling in Neukölln is always more difficult than expected – it’s surprisingly hilly – by Berlin standards – and there are lots of cars and cobbles.

The next major green park was the Tempelhofer Feld (Tempelhof Field), the large public park on the site of the former Flughafen Tempelhof (Tempelhof Airport). As always, cycling through this park is impressive. There are so many people doing many types of sports – cycling, running, flying kites, kite surfing or just enjoying the large open space. I always find it cool cycling along the runways despite not being close to jet speed.

I cycled westwards from Tempelhof to the Volkspark Wilmersdorf (Wilmersdorf Public Park). This long park was formed during the last ice age and has some small lakes in it too. The lovely Rathaus Schöneberg (Schöneberg Town Hall) U-Bahn Station cuts through this park. A little strange but does make for a nice stop on the cutest underground route – the U4.

Once I was done with exploring the Lietzensee, I was back in Charlottenburg and about to head back to the Schloss Charlottenburg. Before that, my blood glucose started dropping so I needed an energy gel for the final kilometres to stay in range. Palpi did try to sabotage my ride after all, but at least I was close to home so this was not as physically draining as the previous Stage.

This was a wonderful route that took me to many green parks in central Berlin. I really enjoyed the nature on offer, especially since it was usually right next to busier parts of the city. It was also nice to contrast different localities in Berlin too – the fancy villas in Grunewald and the more residential Reinickendorf or Prenzlauer Berg, for example. Overall I was also pretty happy with my blood glucose too. The only problems arose after I ate the energy bar which caused my blood glucose to rise too much and Palpi overreacted by delivering more insulin that I actually needed.