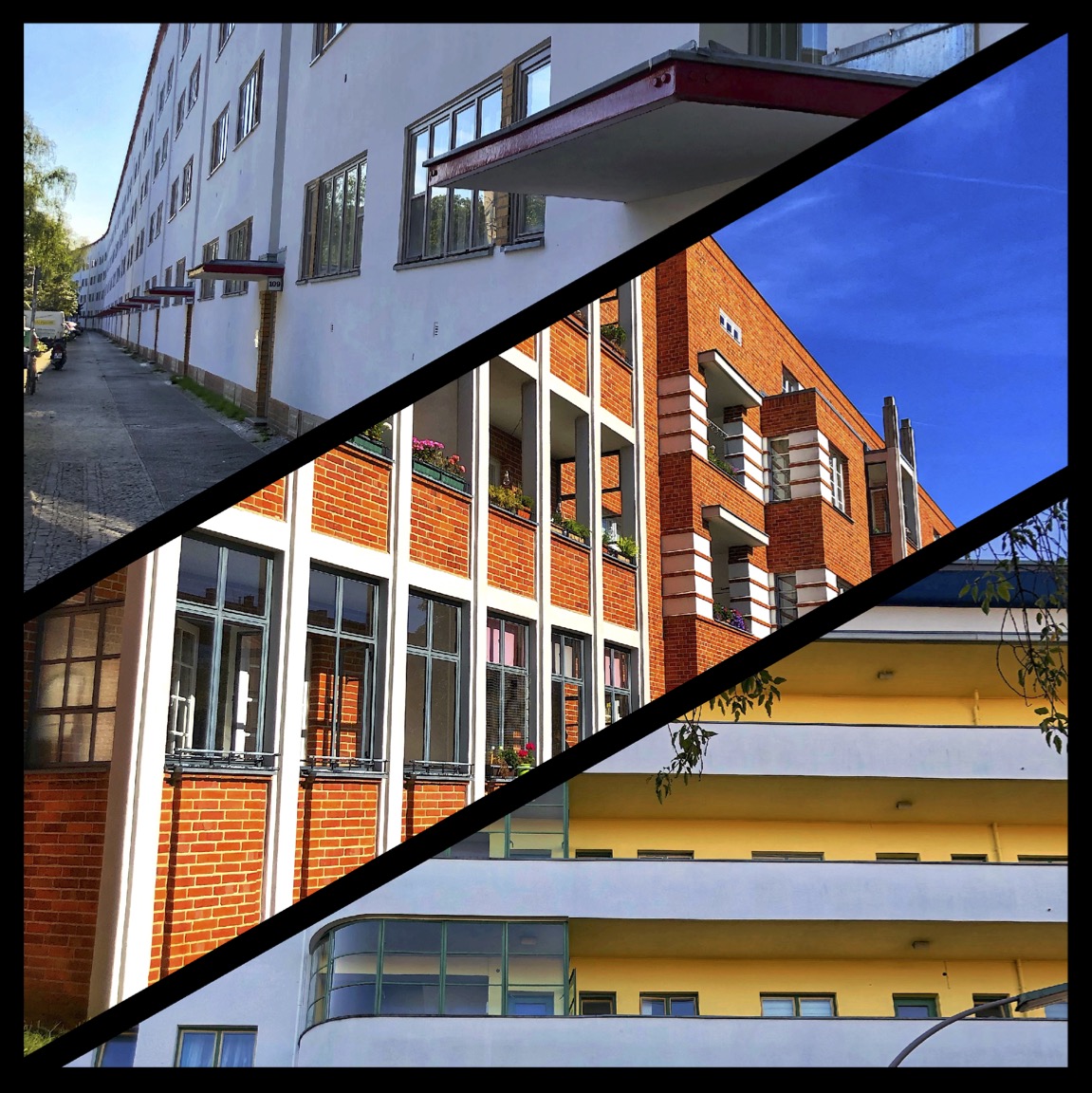 Blood glucose values throughout the ride, plus images of the estates

The next Classics event was visiting all six of the Siedlungen der Berliner Moderne (Berlin Modernism Housing Estates). These six settlements are one of the UNESCO World Heritage Sites and listed as such since 2008.

Around, and especially, after the First World War, there was a shortage of affordable living quarters in Berlin – especially for the workers and lower classes. As a means of tackling this, the city of Berlin took on the ideas of architects for communal living (as opposed to private sector property) made of high architectural quality, providing access to nature, typically through communal gardens and parks and – very importantly – being affordable.

This challenge was met by some of the most well-known architects in Berlin at the time, including Bruno Taut, Martin Wagner and Walter Gropius. The parks and gardens around the estates were also planned, again including Berlin’s most famous landscape architects such as Ludwig Lesser and Leberecht Migge.

The six estates were built between 1914 and 1934, during the Weimar Republic era of German history. They were not damaged during the Second World War but have been refurbished during the 100 or so years after being built. Moreover, all of the estates are still in use by families today as subsidised housing.

A beautifully sunny day in the middle of September was ideal for this tour. Knowing that I would be taking a lot of photographs, having clear blue skies was perfect! After breakfast and preparing my body for the day’s exertions (i.e. reducing both basal and bolus insulin), I cycled towards Siemensstadt for the first of the six estates. This post will look at the first three, and a separate post covers the final three estates.

This first estate was actually the final one to be constructed! I had passed through parts of this large estate during Stage 53 of the Grand Tour de Öffentliche Verkehrsmittel. I have also cycled in the area numerous times but never really connected all the blocks as being part of a single housing estate.

The different styles of buildings within the estate come from the designs used by the different architects responsible for their own sections. The location of this estate was chosen due to its proximity to the many Siemens factories that had opened in the area. The area around the factories was then developed into affordable and well-located living quarters – the Großsiedlung Siemensstadt. The nickname Ringsiedlung (Ring Estate) came from the association of some of the architects with Der Ring (The Ring) collective, whose main aim was to promote modernist architecture.

Most of the housing blocks were built in the north-south direction in order to maximise the amount of light for each apartment. “Licht, Luft und Sonne” (“Light, Air and Sun”) were core design principles of modernist architecture after all. The rooms were ordered to receive optimal natural light, with the bedrooms towards the east and the living rooms towards the west.

Between the housing blocks, there are large communal lawn areas with lovely old trees – a feature of all the Berlin Modernism Housing Estates. The beautiful Volkspark Jungfernheide (Maiden Heath Public Park) is within walking distance of the whole housing estate. Plus the smaller Jugendplatz (Youth Square) and Goebelplatz (Goebel Square) also provide green spaces.

Berliners nicknamed the ship-inspired block the “Panzerkreuzer” (“Battleship”), which contrasted the aims of the architect, Hans Scharoun. He used ship-motifs to signify freedom, cosmopolitanism and modernity not the horrors of naval warfare.

Walter Gropius brought the Bauhaus design to the estate – he was one of its founders afterall. The sleek lines of darkened windows that contrast with the white exterior are great examples of minimalism – another core belief of modernist architecture.

The long block of apartments was the hardest to design since its orientation was not optimal for the principles of “Licht, Luft und Sonne”. The architect, Otto Bartning, decided that the street-facing side would be a single, slightly concave, block with only windows and front doors. The other side faced a huge communal green space and every apartment had a balcony in order to enjoy nature. Many people were critical of this block and it was nicknamed the “Langer Jammer” (“Long Misery”) which is pretty harsh in my opinion!

The blocks designed by Hugo Häring are pretty different from the other blocks in the estate. The exterior colours are a muted brown colour with accented bricks for some contrast. This is really different from the clean and sleek white exteriors of most of the other blocks. The balconies are kidney-shaped with access from two rooms (the kitchen and living room) while at the same time maximising the amount of sunlight.

I personally preferred the white blocks and really liked the subtle symmetric accents of the windows and doors. On such a sunny day, it really brightened up the whole area. I wasn’t such a fan of the tan blocks, I don’t think this use of colour was very effective.

After touring the Großsiedlung Siemensstadt, I cycled towards Wedding for the next estate – this would be the Siedling Schillerpark.

The second estate I visited was the Siedlung Schillerpark. This was the first urban housing project in Berlin during the Weimar Republic (i.e. the German republic between 1918 and 1933). It’s named after the adjacent Schillerpark, itself named after the author Friedrich Schiller, which was built between 1909 and 1913, making it the first public park opened in Berlin.

Bruno Taut, the original architect of the housing estate, was inspired by the Amsterdam School of architecture which was a contemporary movement using red brick and exposed concrete pillars, balconies and loggias. Although the exterior is not as colourful as the Gartenstadt Falkenberg (Falkenberg Garden City) – number five of the estates on my list – which was also designed by Taut, the Schillerpark estate has many bursts of colour on the front doors, but mainly in the interior. Unfortunately, I couldn’t see the interiors since I don’t have access to any of the apartment blocks – it already felt creepy enough spying around the back gardens and blocks!

The original estate built before the Second World War was constructed in three phases. The first phase was the most intricate with three apartments per storey with living spaces having maximal sunlight and cross-ventilation. Communal washing and drying areas were built in the top storey so the residents didn’t have to dry their laundry in the apartments.

The construction regulations had changed by the time the second phase of construction was underway. This led to 2 apartments per storey instead of three, so now one apartment was made larger than the other. The third construction phase took place during the Great Depression of the late 1920s, leading to less ornate and a more minimalistic design than the first two construction phases.

After the Second World War, the housing estate was extended in the 1950s by Hans Hoffmann, who made sure that the new apartments had large windows. The living rooms were placed so that they faced the green outdoor areas. The large glass windows also help in the energy balance of the living areas – a nice feature during the cold Berlin winters!

Besides the lovely Schillerpark, the outdoor areas were designed so that the residents had ample quiet places, meeting places as well as playgrounds for the children. This outdoor design was new to the city and made the estate a sought out one.

Another detail of the exterior design were the street side buildings for storing rubbish. This was an important hygiene consideration and separated the residents from their rubbish. Even today, I think this is a great consideration for residential blocks. In our block, the rubbish containers are openly found at the back of the courtyard so it’s quite a trek for the rubbish trucks to empty the containers.

The next housing estate was the Weiße Stadt which was the final Berlin Modernism Housing Estate constructed in the Weimar Republic. I had cycled through this estate during Stage 39 of the Grand Tour de Öffentliche Verkehrsmittel and was astounded at the clean look of the white buildings. But today I would be exploring the estate in even more detail than during that Stage.

The Weiße Stadt was designed by the architects Otto Rudolf Salvisberg, Bruno Ahrens and Wilhelm Büning. Their design followed the Bauhaus principles of Neue Sachlichkeit (New Objectivity) which promoted ideals of rationality and functionality. These ideals were incorporated into the designs by positioning living quarters in such a way as to maximise the amount of sunlight. All the while making sure that the apartments would be affordable for a wide cross section of the Berlin society and not just those in well-paying jobs.

The apartment blocks were laid out in an open structure having large green spaces full of large trees between separate blocks. The Weiße Stadt included a large number of social institutions such as a Kindergarten, doctor’s clinic, café, central laundry facilities and many shops which also brings forth the communal aspect of the housing estate. These were also in line with the Neue Sachlichkeit ideals.

The bridge building straddling Aroser Allee really stands out. Salvisberg designed this block with 40 metre wide reinforced concrete structure. This construction uses access balconies so that the residents could enter the apartments using an external entrance. This meant fewer staircases in the building while also leading to better ventilation of the apartments.

From the Weiße Stadt, I headed eastwards towards Prenzlauer Berg for the fourth estate – the Wohnstadt Carl Legien. But more of that in the companian post 😉 . While crossing Bornholmer Straße – always a highlight for the lovely views – I ate another energy bar to keep my blood glucose within range.

In the companion post, you’ll get to see the three remaining estates: Wohnstadt Carl Legien, Gartenstadt Falkenberg and the Hufeisensiedlung Britz. Expect lots more colours from these estates!