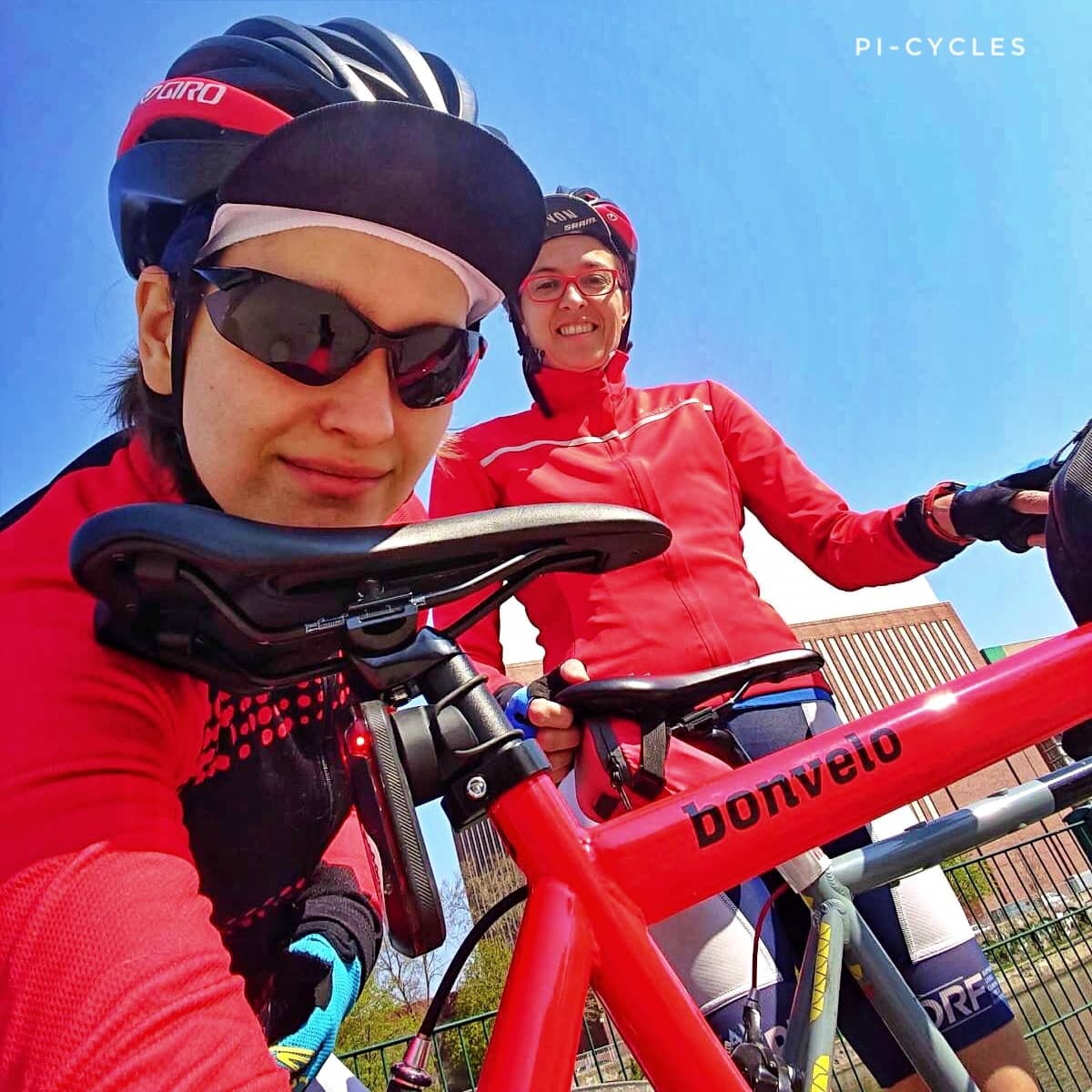 Blood glucose values throughout the ride

The 30th April 2021 was the 10 year anniversary of when Nadja and I met, so we planned a nice Corona-safe activity – hunting out cherry blossoms! I specifically wanted to go to the cherry blossoms planted on the Berliner Mauerweg (Berlin Wall Path) between Teltow and Lichterfelde. However, the weather forecast for the 30th was not great – grey and rainy – so we moved the ride forward two days for much better weather conditions.

This was also going to be Nadja’s first proper ride on her new single speed bike – she is called Bonnie. We really struggled fitting the new tyres on Bonnie – it took three separate days and one ripped inner tube before the tyres were properly on – so I have forbidden Nadja to ever get a puncture. So far she has obeyed. 😀

We had a late breakfast where I injected a lower amount of bolus and basal insulin before we headed out. I created our route to visit plenty of other areas where cherry trees are planted. The first stop was through the Rudolph-Wilde-Park in Schöneberg. While there weren’t any cherry trees in the park, we were stopped by two squirrels chasing each other up and down a tree. Their speed was admirable and for the first time, we heard the sounds that squirrels make – it’s a high-pitched squeak. Very very cute.

As soon as we left the squirrels and made it back to the street, we were greeted by lovely cherry blossoms in Nymphenburger Straße. We stopped for some photos and I also needed to take on a gel as my CGM alerted me that my blood glucose was dropping.

We continued on towards the Südkreuz station to get to the fantastic cycle path that runs parallel to the train tracks. This cycle path goes through the Schöneberger Südgelände (Schöneberg Southern Area). Despite the lack of cherry trees in the park we could see some in the nearby allotments.

Once we reached Lankwitz and navigated the usual cycling chaos of terrible bike lanes, we cut through a park and cycled along a nice path (never thought I would write “Lankwitz” and “nice cycle path” together) that had some lovely blossoms. After this rarity, it was not far to our proper destination – the cherry blossoms at the Japan-Eck (Japan Corner) between Teltow and Lichterfelde.

The cherry blossoms were part of the Sakura-Campaign initiated by TV Asahi, a Japanese TV station, to plant cherry blossoms along certain areas of the former Berlin Wall. The aim was to spread peace and tranquility through the planting of these trees. Cherry blossom festivals (Hanami) are celebrated in Japan every year heralding the coming of spring.

I had cycled along the trees during my Berliner Mauerweg tour, but since it was July that time, it was too late to enjoy the blossoms. Once Nadja and I arrived, we were greeted by the lovely white blossoms and could see that the pink blossoms were not quite in full glory yet. Probably because it’s been colder this year, so the peak blossom time will be in May rather than the end of April.

This didn’t take away from the beauty of this area and we walked through the trees before stopping for a food break. We ate the final two flapjacks of my previous batch, but I decided not to inject any insulin as I was worried my blood glucose might drop again on the way back home.

The next stop was the Ceciliengärten (Cecilie Garden) in Schöneberg – named after the Prussian Crown Princess Cecilie. This is an Art Deco estate built in the mid-1920s with a lovely little park in the middle. The ornate facades really contrast some of the modernist estates built around the same time – especially those I visited during my tour of the Siedlungen der Berliner Moderne (Berlin Modernism Housing Estates).

Once we turned onto the Ceciliengärten, we gasped at the blooming blossoms along the street. It was really amazing. We had a nice break to take in some sun on the grass in the middle of the estate. My blood glucose had skyrocketed after the flapjack so I injected one unit of bolus insulin to help bring this down.

After this little Vitamin D top up, we cycled back home and made a point of having our first ice cream of 2021 from the ice cream seller at Richard-Wagner-Platz. This was a perfect way of ending this lovely trip and celebrating the 10 years we’ve had together.