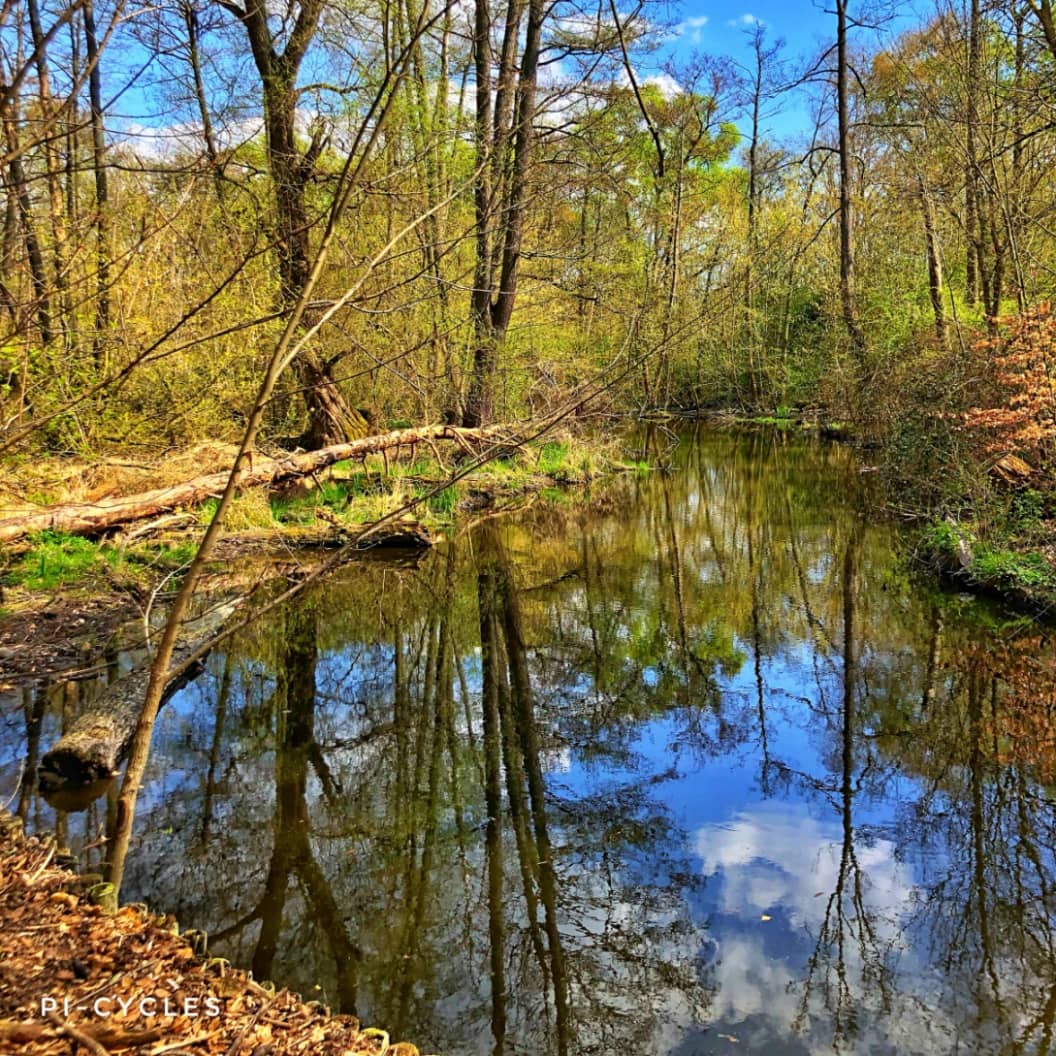 Spring was back for a few days so I could tick off the final route of the BRC Endspurt Meisterschaft. Short sleeves and shorts were back after the winter kit of the previous Stage and I used Severus, the mountain bike, once again.

I reduced my bolus and basal insulin before heading out towards the northern Berlin district of Tegel. Just twenty minutes into the ride, my CGM alerted me that my blood glucose was already dropping, so I ate an energy bar for some extra carbs. Once I reached the starting point, I ate a homemade flapjack and unlike the previous Stage, I decided not to inject any bolus insulin even though my blood glucose was now on the high side.

This route followed the Tegeler Fließ (Tegel Stream) and this area is also a nature reserve. I stayed alert for any potential bison sightings but they were a bit shy and so I didn’t see any. The first detour off the Tegeler Fließ was to head up the Lübarser Höhe (Lübars Height) which is a lovely park with a pretty steep hill – great views all the way to the Fernsehturm (TV Tower). There were also people attempting to paraglide!

The fields of Blankenfelde were next, really lovely especially with the trees becoming green and some early bloomers too. Road works near the S-Bahn Mönchmühle meant I had to take a detour from the set route. I cycled along trails that ran parallel to the S8 tracks and then between the Autobahn and one of the many irrigation ditches in the area. There was a pretty strong headwind here so it was tough going.

Next up was the large and lovely Tegeler Fließtal (Tegel Stream Valley) which had some pretty steep and challenging trails. Between this lake and the Mühlenteich (Mill Pond), there was the Schloss Dammsmühle (Damm’s Mill Palace). This is currently being restored and has really had a colourful history! My highlights/lowlights are that Napoleon stayed overnight, Kaiser Wilhelm II met with his cousin the Tsar Nicholas II, Heinrich Himmler claimed the palace and the SS used it as a subcamp of the Sachsenhausen concentration camp, Soviets moved in, later the Stasi and after reunification it was used for outdoor concerts. Quite the CV.

I circled around the Mühlenteich and the opposite banks of the Tegeler Fließtal to get to the next lake – the Summter See (Summt Lake). More fantastic forest trails let me back over the Autobahn where there was the largest amount of sand I think I’ve ever seen! All for the large construction site on this section of the Autobahn. The bulldozers looked tiny compared to the mountain of sand.

The very next trail nearly led to another sabotage attempt during this race series – once again a stick lodged in my rear derailleur! I heard the stick getting caught in time, so I could remove it safely and continue on. Can’t believe this happened for the third time but at least nothing bad came of it.

I was now heading towards Frohnau in Berlin and I cycled along the cobbled trail in the forest that is part of the Berliner Mauerweg (Berlin Wall Path). I had a gel as my blood glucose needed a boost for the final stretch that I (rightly) anticipated was going to get pretty tough.

While crossing Frohnau to get to another section of the Berliner Mauerweg, I was coming up behind another cyclist on a mountain bike. He saw me coming and made like he wanted to power on and leave me in the dust. Once he saw this wasn’t going to happen, he waved me by and said “Go ahead, you have a better bike”. Sigh.

The final section took me through the northern section of the Tegeler Forst (Tegel Forest). I had been here before, so I knew that there would be lots of hill paths to tackle. And I was not wrong in that thought! Steep and rooty trails made up most of the final few kilometers and I was very happy to get back to the starting point after much huffing and puffing.

After recovering, I cycled back home glowing in the knowledge that I had completed 6 very tough routes. These routes took me to some new areas that I will definitely go back and explore some more. The Gamenground from Stage 2 and the forests from this route are on my “Explore Further” list.

After all my efforts, I placed fourth out of eleven female entrants and eleventh overall out of 75 in the final results of the BRC Endspurt Meisterschaft 20/21. The main reason for the high placing was that I completed all six routes. I certainly didn’t think that I would be challenging for the top spots against much faster cross-riders. But I had a great time, the routes certainly challenged me (and Flash) and I got to discover new areas which was what I hoped for at the start of the competition. Hope that there will be future series with a similar format!