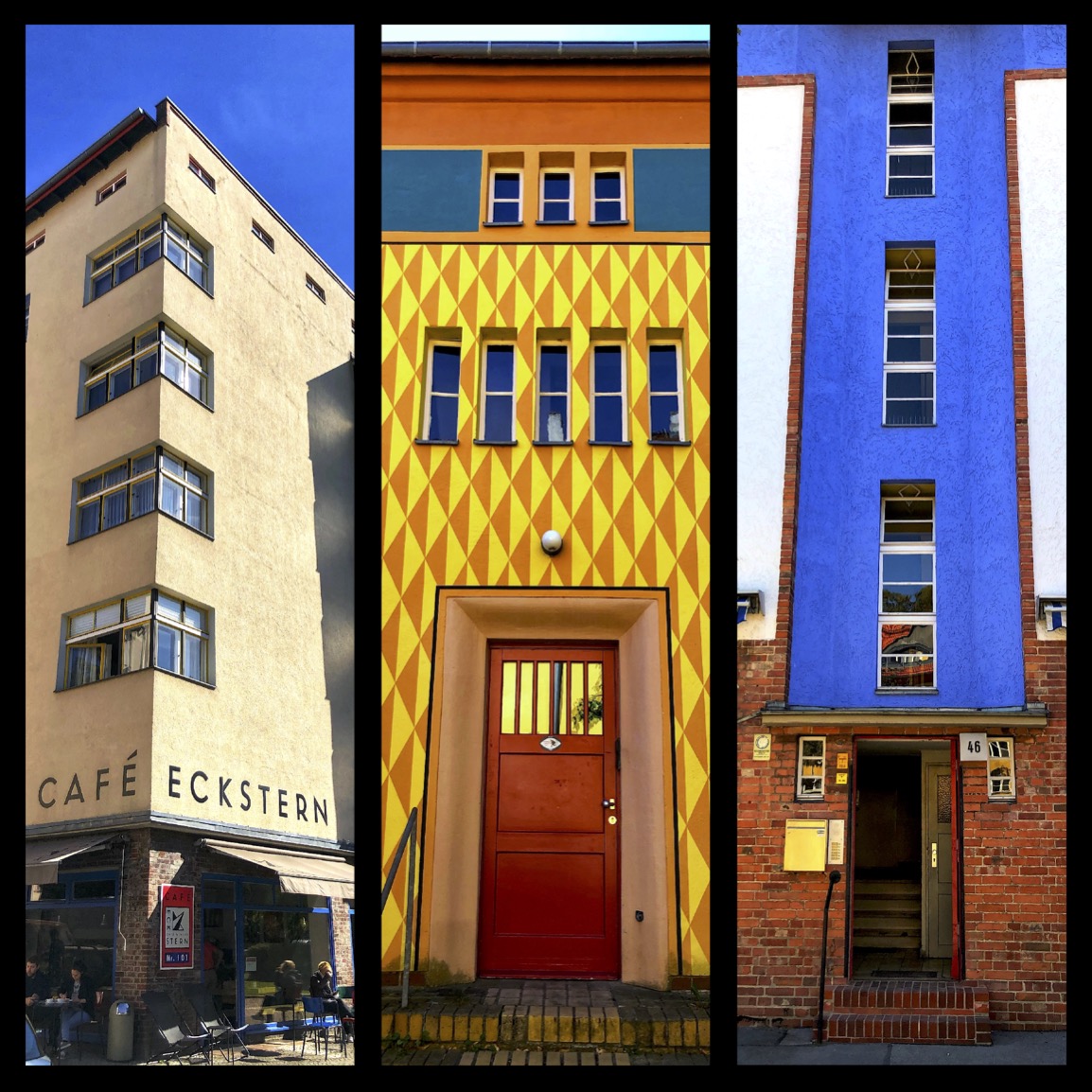 Blood glucose values throughout the ride, plus images of the estates

This is the second part of Classics tour of the Siedlungen der Berliner Moderne (Berlin Modernism Housing Estates) that are UNESCO World Heritage Sites. The first post looked at the Großsiedlung Siemensstadt, Siedlung Schillerpark and the Weiße Stadt. This post looks at the remaining three estates.

After visiting these three estates, I headed from the Weiße Stadt (White City) in Reinickendorf towards Prenzlauer Berg which is where the Wohnstadt Carl Legien is located. I stopped at the Bornholmer Bridge for some views and to take on some carbs as my blood glucose was in need of a boost.

The fourth housing estate was the Wohnstadt Carl Legien, who was a well-known socialist and trade union leader in the German Imperial Era. He was also the first chairperson of the Allgemeiner Deutscher Gewerkschaftsbund (German General Trade Unions Association) which was founded in 1919. Carl Legien died in 1920 so this housing estate was named in his honour.

This estate is the closest to central Berlin – nowadays it has views of the Fernsehturm (the TV Tower) – and so it has the highest population density of the six Berlin Modernism Housing Estates.  It was also the final housing estate that Bruno Taut designed in Berlin before he fled Germany after the Nazi regime came into power. He was a committed socialist, so not welcomed by the Nazis, and settled first in Japan and then finally in Turkey.

As with all the housing estates, they were designed using the principles of “Licht, Luft und Sonne” (“Light, Air and Sun”) which were the opposite of the typical social housing projects in the city. The flat roofs – not used in previous social housing blocks of the time – were criticised by some politicians. They thought that these were too refined (flat roofs were associated with Mediterranean villas) for the less-wealthy Berliners but the city planners disagreed, stating that they aimed to lift up the less-wealthy.

The Wohnstadt Carl Legien has six long U-shaped blocks with four to five storeys with the U-opening towards Erich-Weinert-Straße. The road-facing exterior was painted in a yellow colour to give the illusion of wider streets. The backyards of the individual U-blocks have their own colour scheme.

The communal backyard is enclosed in the middle of each U-block and is full of large trees, green areas and play areas for children. Every apartment has a balcony or loggia facing the backyard. The colour schemes of the backyard are full of lovely details of the balcony doors and windows that really pop – apparently Taut had even ideas on the colour of flowers that residents could put on their balconies!

The whole estate had a central laundry and boiler house in the courtyard of one of the red blocks. This was left in disrepair in the 1980s and was left empty for numerous years. Nowadays it is used as a storage space for the Bauhaus archive museum.

After the fall of the Berlin Wall, the blocks were still showing signs of damage from the Second World War! Plus the exterior was more grey than yellow. It took nearly a decade to complete the restoration works of the whole estate. A job very well done in my opinion.

From Prenzlauer Berg, it was a long way to the penultimate estate. I loved the pop-up bike lane on the Adlergestell, it was such fun cycling on the smooth road surface rather than the bumpy pavement which was the previous bicycle path.

By the time I reached the Grünau S-Bahn station, I was getting pretty hungry and wanted a little break. So I bought a coffee from the take away place near the tram stop and enjoyed this caffeine boost as well as an energy bar. From here it was a short distance to the Gartenstadt Falkenberg which was the fifth estate of the Tour.

The Gartenstadt Falkenberg was the first of the six estates to be built and was influenced by Ebenezer Howard’s ideas of Garden Cities that were popular at the time, especially in England. Bruno Taut, at the time of the estate’s design, was an unknown architect and had big plans for the estate. He planned for around 1,500 flats but the First World War threw a spanner in the works and so only a fraction of the concept was realised.

Taut certainly wanted to make a statement with this housing estate. He aligned the houses asymmetrically and varied the offsets of different houses along the same street. This was to give the estate the feel of a “growing village”. The narrow paths between the gardens also give a villagy feel.

The colours, geometric designs and contrasts of the exteriors are the defining feature of this estate. Each building has its own colour scheme, not just the walls and doors but the shutters, windows, patios and balcony balustrades. Most buildings at the time used ornate staircases, bay windows and other fancier features, but Taut wanted the colour scheme to take their place. Paints were the cheaper option too!

At the time, the colourfulness of the estate was heavily criticised. Taut was even deemed to be “arrest-worthy”! The nickname of the “Watercolour Estate” was meant to be derogatory but now people come from all over the world to admire the colours of the estate. I personally LOVE the colours and designs.

Similar to the Wohnstadt Carl Legien, the Gartenstadt Falkenberg was in need of restoration after Germany was reunified in 1990. Both of these estates were in East Berlin and the communist regime didn’t really support the upkeep of these estates. The cooperative that owned the Gartenstadt Falkenberg took on the restoration works a few houses at a time. The restoration works were also completed in such a way that the residents didn’t have to move out during the times of the works!

The Falkenberg housing estate was the first in Germany that gave so much emphasis to the garden areas for each building. So much so that Ludwig Lesser, a famous landscape architect, was hired to create the allotment gardens. Each building had at least one garden and many also had climbing plants, tree rows and hedges bordering each garden.

While I didn’t appreciate the rough cobbles on the streets, the colours of the houses made up for it. I thoroughly enjoyed this burst of colour especially since the previous four estates were pretty monotone with only accents of colour.

There was now only one housing estate left, this was the Hufeisensiedlung in the Britz district. I stumbled upon an outdoor model railway on the way – the things you find in the side streets can be quite random.

The final estate of this Tour was the fantastic Hufeisensiedlung. The estate is named after the large horseshoe-shaped apartment block that surrounds a glacial pond (i.e. one dating back to the ice age). However, this is just one part of the whole estate! Many of the surrounding streets also belong to the same estate. Plus this area was the scene of contrasting architectural styles: modernism vs traditionalism. A battle for the ages but more of that later.

The apartments in the horseshoe block were designed so that the entrances face the surrounding road while the living quarters face the central green space. All apartments have their own balcony or loggia, bathroom and many also had central heating too. Many things that we take for granted today, but not so in the 1920s.

Behind the horseshoe, the rhombus-shaped Hüsung (named, like most of the streets in the estate, after one of works of the poet and author Fritz Reuter) section of the estate is full of bright red coloured terraced houses. This gives the appearance of a village green and the green centre had its own lime tree – like most actual villages.

On either side of the Hüsung section, there are more rows of terraced houses. Each street has its own colour scheme, and typical of Taut’s designs, the doors and windows are painted in contrasting colours to provide some individualism to each street. All of the terraced houses have large back gardens and some of the houses have small front gardens too. Reminiscent of the design of the Gartenstadt Falkenberg.

The northern part of the estate was designed by Martin Wagner and these apartment blocks have a more rounded structure than the sharp lines of Taut’s blocks. The blocks were painted in white and yellow with colourful accents on the doors. These blocks also only have a front garden for the residents to enjoy and/or grow their own vegetables.

Perhaps the most striking feature is the long red block, called the “Rote Front” (“Red Front”), by Taut. The street side has clean lines of windows and doors while the balconies overlook the gardens at the rear of the block. The “Rote Front” didn’t just refer to the colours of the facades but also the socialist nature of the designers and residents of this estate.

Taut designed the apartment blocks within the whole estate to have flat roofs. So the top storey had as much space as those on lower floors. This riled the traditionalists who thought these flat roofs were un-German, as opposed to the “native” pitched roofs. Once the Nazis took power, flat roofs were not part of their building agenda.

The flat roofs angered the conservatives so much that Taut and Wagner were not allowed to build all their designs. So the estate facing the “Rote Front” was given to another building society – one with more traditionalist plans. So pitched roofs and more traditional designs are in direct opposition to the modern and colourful buildings on the same street.

The Horseshoe Estate also made it onto The Guardian’s list of the History of Cities. Not bad for a housing estate in one of the suburbs of Berlin!

This was a great Tour, it was great exploring some of the iconic estates of Berlin. I really like the modernist style of architecture and really enjoyed the details – like using different colours for window and door frames. All the estates were restored before being added to the World Heritage list and this work was really done well.