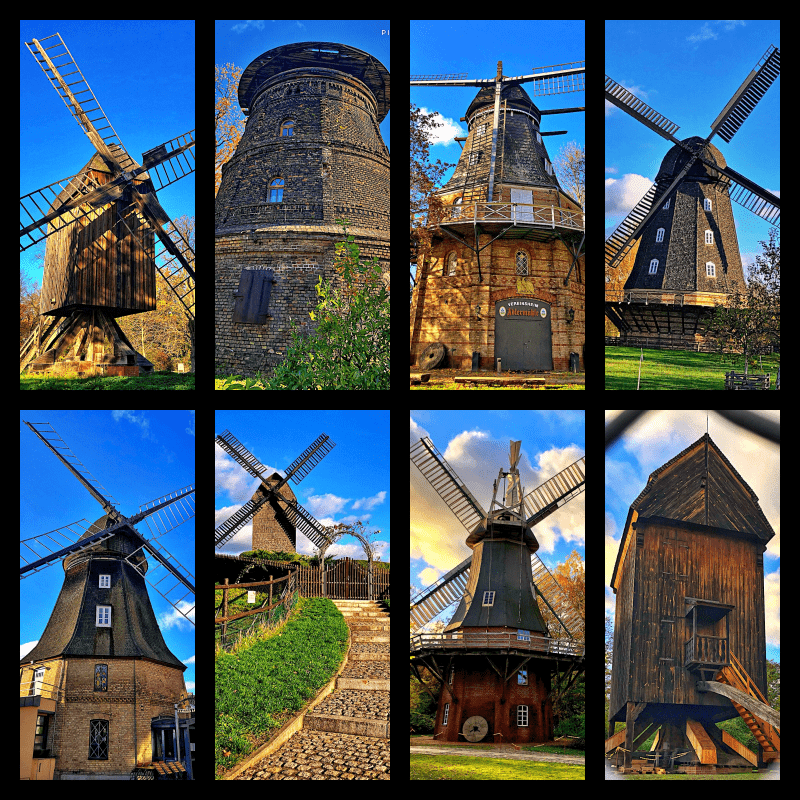 Blood glucose values throughout the ride, plus images of the windmills

During the Grand Tour de Öffentliche Verkehrsmittel, I came across two windmills (in Britz and Marzahn) and that got me wondering about where others might be hiding. Good old Wikipedia informed me that there are eight windmills standing in Berlin – a far cry from the 150 that stood back in 1860. So the seeds of the Berliner Mühlenrundfahrt (Tour of Berlin’s Mills) were sown and made it a great addition to the One-Day Classics.

I waited for a sunny autumn day so that I could fully capture the windmills in full glory, plus riding in the glorious autumn colours is great too. An added bonus was that it was still relatively mild so I didn’t need to dress up in full winter gear!

After breakfast, and the appropriate reductions in bolus and basal insulin, I headed off towards the district of Gatow. I had arranged to meet my friend, who lives in the neighbouring district of Kladow. During the Grand Tour de Öffentliche Verkehrsmittel, she provided plenty of coffee when I was in Kladow and this would be no different! She drove to the windmill in Gatow and brought a flask of coffee so we enjoyed that. Unfortunately she had to work so she couldn’t follow me and provide coffee throughout the ride. Very disappointing.

This windmill is not the original mill from 1845 that stood on the Mühlenberg (Mill Mountain) in Gatow, but rather a mill from a town near Prignitz in Brandenburg. The mill was moved to Gatow in 2004 just in time for Gatow’s 750 year anniversary. The reason why the original mill is no longer standing is a fantastic story – in 1921 it was sold to Richard Eichberg, a film director and producer, who wanted to use the mill for the film “Die Liebesabenteuer der schönen Evelyne oder die Mordsmühle auf Evanshill” (“The amorous adventures of beautiful Evelyne or the Murder Mill on Evanshill”). The original Gatow mill was then burnt for the final scenes of this film! There aren’t even tapes of this film anymore so we can’t see the Murder Mill being murdered.

After Gatow and saying Auf Wiedersehen to my friend, I made my way towards Zehlendorf. This involved getting back to the Freybrücke (Frey Bridge) to re-cross the river Havel and I took a detour through the magnificent Grunewald. The trees along the quiet trails in Grunewald were turning yellow – a real treat – until my planned route took me up a steep and rooty incline. It was so steep that I had to walk the bike up the incline.

The mill in Zehlendorf differs from all the others in Berlin for two reasons – firstly, it is made of stone and not wood, and secondly, it is now a residence. The stone mill was originally built in 1879. In the 1920s however, there was not enough wind in the area to mill the grain so the operation was replaced with a petroleum motor. The wind vanes were removed during the Second World War to deter the Allied bombers from using the mill as a reference point during bombing campaigns. The mill fell into disrepair during the 1950s until the 1990s when investors were found to restore the historical mill and turn it into a unique living space.

The next three mills are in adjacent districts of Berlin (Mariendorf, Britz and Gropiusstadt). On the way from Zehlendorf to Mariendorf, I got to cross the Teltowkanal (Teltow Canal) and admire some gorgeous autumnal views. Most of the way was through residential side streets – a great way of boosting my wandrer.earth score!

The Adlermühle (Eagle Mill) in Mariendorf was moved from Kreuzberg in central Berlin in 1888, since the residential buildings built in central Berlin affected the wind flow needed for the mill operations. It was moved to Mariendorf which at the time was full of fields and not surrounded by buildings like it is today. The mill used wind power until 1931 and then switched to an electric motor till 1959 which is when the mill was put out of operation. The building was then bought by the Schwimmverein Friesen (Friesen Swimming Club) and is now used as their clubhouse. Four wind vanes and the upper deck were restored in 1982 but one vane was removed as wood rot was found. The swimming club hosts many events at the bar found in the ground floor and it can also be rented out for party functions – pretty cool!

My blood glucose was doing pretty well so far but I was starting to get a bit hungry. So I ate an energy bar in front of the lovely Adlermühle. After chomping down my food, I cycled the short distance to reach Britz and it’s mill which is close to the large Britzer Garten (Britz Garden).

The Britzer Mühle, built in 1866, still stands in its original spot and looks mighty impressive too. The mill operations switched from wind to a diesel engine in 1936. The mill was damaged during the Second World War and the building plus wind vanes were restored in the 1950s. The German National Garden Show (or BUGA as it’s commonly known) in 1985 wanted to use the Britzer Mühle as a feature piece so restoration works of the exterior and interior were undertaken to bring the mill back to its former glory. The mill is now used by hobby millers who can even get a diploma in milling at the Britzer Mühle. The restaurant in the former grounds of the miller’s house also offers bread made from grains milled at the Britzer Mühle!

Next it was onto the final mill located in the Southern districts of Berlin, so I cycled into Gropiusstadt. This district is known for its high-rise residential blocks, so a historical mill is certainly a surprise.

The Jungfernmühle has been in Gropiusstadt longer than the high-rise blocks – but it certainly also took a bit of a tour to get to its current location. The mill was originally built in 1757 in the Dutch Quarter of Potsdam, it was then moved to Neukölln in 1860 before being moved again to its current location (then a town called Buckow and not Gropiusstadt) in 1892. The mill was fully operational until 1980 (milling was done by a motor after 1926) making it the final mill in Berlin to cease regular operations. The Britzer Mühle and Marzahner Bockwindmühle are still functional but not in regular use.

In 1993, the mill was restored and turned into a restaurant. The area around it has been developed into a Dutch-style quarter reminiscent of the original mill’s location. The mill was named in honour of the daughter of the first miller who was caught by the wind vanes and smashed against the mill building. She died after this horrible accident – apparently getting caught in the large vanes was quite a hazard since they went all the way to the ground unlike the restored vanes.

Those were all the windmills in the southern part of Berlin, now it was a long cycle up north towards the district of Marzahn. I crossed the Teltowkanal again and then made my way through many residential streets. Crossing the S-Bahn tracks at the Biesdorf S-Bahn station was more adventurous than usual though. Normally there is a path over the tracks but there were works going on so I had to cross using the pedestrian overpass. So I carried Flash up and down the stairs since I didn’t want to breathe the stale air of the lift (plus there were people using it) – keeping safe with Covid-19 in mind!

The windmill in Marzahn has been in place since 1994. Along with the Britzer Mühle, this is the only other still fully functional windmill. Bread made from the grain milled by this windmill can also be bought locally. The original windmill in Marzahn was built in 1815 but it fell into disrepair after the Second World War. The East German government planned on moving a windmill from another town to Marzahn as a replacement, but the people of Marzahn were not in favour of this. It was only after German reunification that these plans were revisited and a new windmill was built. Since then, the wind vanes have been repaired after damage from some heavy storms. Weddings can also take place at the windmill.

Marzahn is another district known for its high-rise blocks, but the location of the mill is in the heart of the old village of Marzahn. This area is well-hidden from the surrounding roads and it really juxtaposes with the modern residential blocks.

The final two windmills are both found in the Deutsches Technik Museum (German Museum of Technology) in central Berlin. If you buy a ticket to the museum, you can visit the windmills close up. But both can also be seen from the Gleisdreieck Park nearby – which is what I did.

I was starting to feel tired at this point – my heart rate was higher than I would’ve liked for most of the ride – so I was happy to be heading in the direction of home. Besides stopping to tick off the final two mills, of course. But at least the end was in sight!

The Dutch-style windmill was originally built in 1911 in Poghausen which is in Ostfriesland, at the North Sea coast. It was moved to the museum for restoration in 1984 and is used for windmill demonstrations, but usually using a motor since there isn’t enough wind energy in central Berlin. As this is a Dutch style windmill, the top moves in the direction of the wind to maximise the wind power available. Whereas in older windmills (Bockwindmühlen / Post mills), the whole body of the mill moves in the direction of the wind.

The second windmill in the Deutsches Technik Museum was originally built in the Köpenick district of Berlin in 1820, but was moved to Bohnsdorf, on the outskirts of the city, in 1872. The mill continued operations until it was damaged at the end of the Second World War. It was moved to the grounds of the museum in 1983 for reconstruction. The Bohnsdorfer Bockwindmühle is not in great state, the interior in particular needs urgent repairs so that it can be used for demonstrations at the museum.

It’s easy to see the differences in the technologies developed for these two windmills. The Dutch-style mill looks much more recognisable since it was the more modern of the two and its technology was rampant before the advent of electrical power for milling.

Those were the eight windmills still standing in Berlin! It was really nice seeing such historical buildings and in the case of the Britz and Marzahn mills, still functional. These mills really show how people harnessed renewable energy for everyday use (i.e. mill grain to make foods, such as bread). We should look to these technologies to help us save the future of our planet.

I cycled back home after the visit to the (exterior of the) Deutsches Technikmuseum feeling rather tired but pleased after a great day in the saddle. My blood glucose was really well-behaved throughout, which is always a pleasant surprise! After the strenuous ride, it was time for some well-earned rest days.