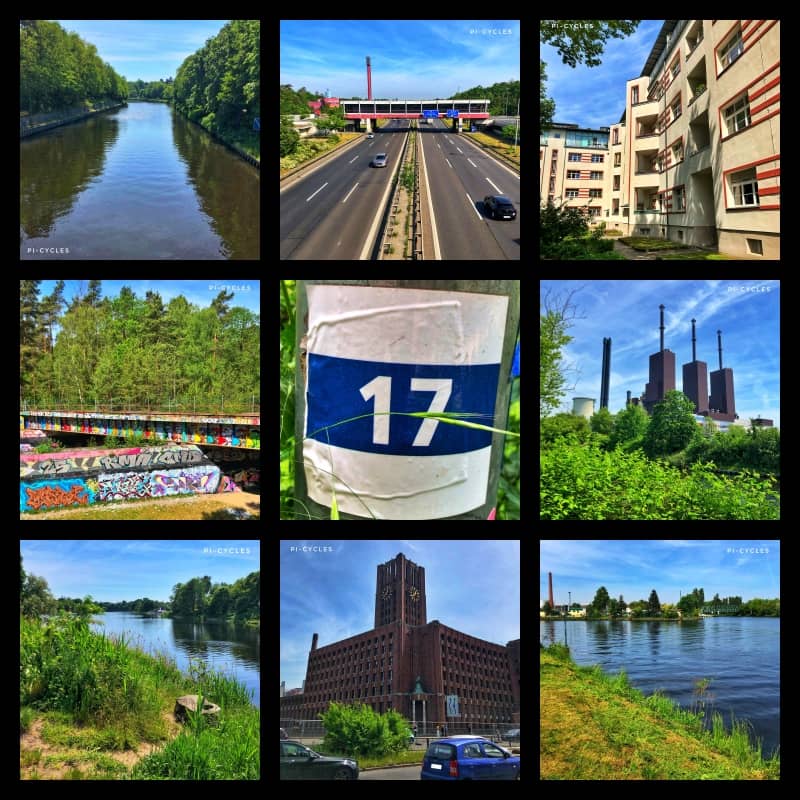 After the previous Stage, Nadja and I had a wonderful break at the Baltic Sea – it even included some forced rest for her, since she twisted her knee on the first day, while walking on the beach no less!  It initially calmed down so we went out for a bike ride. This was not a great idea since Nadja’s knee got progressively worse and we ended up having to go to the hospital. She came out with crutches and a knee brace but at least nothing was broken. The rest days really helped and by the end of the holiday she was hobbling less and less.

Another big change was that I now have an insulin pump that connects to my Dexcom CGM. A separate device includes an algorithm that determines the amount of insulin delivered by the pump based on my current blood glucose level, level of physical activity and amount of carbohydrates eaten. This algorithm learns the daily patterns of my blood glucose so that I will hopefully have more time with my blood glucose in range (70 – 180 mg/dL). This Stage would be the first time using the algorithm for a long ride so it would be a learning experience for both me and the algorithm! And boy was it a learning experience – more on that later.

The route for this Stage would take me along one of the ubiquitous waterways in Berlin – the Teltowkanal (Teltow Canal). This canal was built between 1900 and 1906 and runs between Wannsee in the West of Berlin to Grünau in the East. The Teltow Canal connects the Havel and Dahme rivers (from Stages 12 and 9) while bypassing the section of the river Spree (Stage 1) that flows through central Berlin. The paths for this route follow the tracks of the towing railway that was installed along the canal to prevent all the barges from damaging the banks.

I prepared for the ride ahead with my usual breakfast and informed my device – called Palpi (short for Palpatine; it is the overlord of Paula the pump after all) – of the impending sportiness. Palpi should then automatically try to keep my blood glucose stable at around 180 mg/dL during my ride. I then headed out towards Wannsee where the Teltowkanal flows into the Griebnitzsee (Gribnitz Lake)  for the start of the route.

About an hour into the ride, my blood glucose was dropping and Palpi very loudly insisted that I take on carbs. I obeyed the overlord and had a gel. Just to be on the safe side, I also ate an energy bar once I got to the starting point.

The first section of this route took me away from the actual canal to stay within the Berlin boundary. This led me through the lovely Düppel Forst (Düppel Forest). I recognised parts of this forest from Stage 51 of the Grand Tour de Öffentliche Verkehrsmittel. In particular, I remembered the sections along the tracks of the former Stammbahn (Main Railway) between Berlin and Magdeburg. This line fell into disrepair when Germany was divided. Now the remaining bridge is an open air gallery of some amazing street art!

After this forest detour, I headed directly towards the main event – the Teltowkanal. I followed the same trail as in Stage 15 – much greener than that day since many more trees have bloomed in the meantime. I admired the Lichterfelder Heizkraftwerk (Lichterfelde Thermal Power Plant), something I always do when I’m in the area – certainly one of my favourite buildings around.

Before I could reach the Tempelhof industrial area around the Teltowkanal, Palpi was once again alerting me that my blood glucose was falling rapidly. I once again had a gel and an energy bar to counteract this. I was starting to get annoyed by the alerts as well as my blood glucose yo-yoing about. This was physically very tiring too and I even considered simply heading back home.

I decided to continue on and soon was on one of the great sections along the Teltowkanal. There were also some great views of where three canals intersect – the Teltowkanal, Britz Canal and the Neuköllner Schifffahrtskanal (Neukölln Shipping Canal). I initially cycled along some allotment gardens in Britz before crossing the canal for a beautiful stretch between the canal and the Autobahn. This is also part of the Berliner Mauerweg (Berlin Wall Trail) and hugely popular with cyclists and inline skaters too.

The final stretch of the route took me briefly through the Altglienicke district where I could cycle under three bridges. Two of these are railway bridges and the other is the very busy Adlergestell road. This lovely quiet path led me to the confluence of the Teltowkanal with the river Dahme and the end of the route.

Palpi overreacted to my blood glucose increasing from the previous food stop and was now causing it to drop – again. I had yet another gel and bar combo at the banks of the Dahme. I started to feel a bit sick from eating so much sweet stuff – this was at least double what I would normally eat during such a ride.

During the ride back home, I kept an eye out on how much insulin Palpi was making Paula deliver. By the time I reached the Adlershof campus, Palpi was once again overcompensating for the natural (and desired) increase in blood glucose. I literally couldn’t stomach eating anything else so I manually stopped Palpi and Paula from being able to deliver more insulin. This worked out great and I got home safely without needing to eat more.

I was expecting this to be a tougher Stage since I was riding with a new system for managing my blood glucose. However, I wasn’t expecting it to be this tough – I was absolutely knackered by the time I got home. Dealing with so many alarms was not fun and I hope that Palpi and I will learn quickly how to get through these sporty days. Still early days yet!