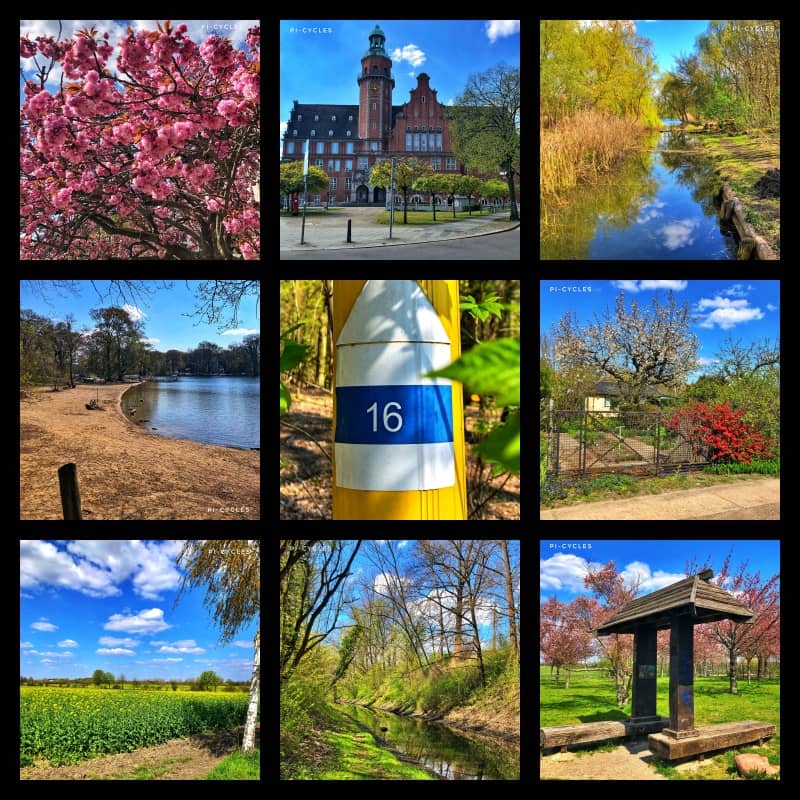 It took a while for good enough weather to tackle another Stage on this Grand Tour. Spring was its usual temperamental self, so there was a cold snap after I finished the previous Stage. This wasn’t all bad though as my calf muscle was feeling strained, so I used the opportunity to rest up. I then just had to wait for a sunny day and make the most of the planned route.

This route would be similar to that of Stage 13 where I cycled through northern districts of Berlin from West to East. This route differs from that one as it was loosely inspired by the wandering spirits of the renowned von Humboldt brothers Alexander and Wilhelm. These brothers were born in the late 1700s and grew up in the Schloss Tegel (Tegel Palace) just north of the Tegeler See (Tegel Lake). Wilhelm was a philosopher and linguist while Alexander was a geographer and naturalist and also took on many expeditions to the Americas. I would not be travelling that far though!

Before heading out to the starting point of this Stage, I prepared myself by reducing both my basal and bolus insulin. Then after a hearty breakfast, I cycled towards Hakenfelde and the little ferry that crosses the river Havel. This spot was the starting point of Stage 2 and ending point of Stage 12. While waiting for the ferry, a fellow cyclist struck up a conversation with me about my summery cycling vibes. I was in shorts and a short sleeved jersey while he was prepared for rain!

Once I reached the other side of the Havel, I was ready to head into the Tegeler Forst (Tegel Forest) and towards the top part of the Tegeler See. There were plenty of small sandy beaches here, the lake is popular for many water sports. I saw plenty of sailing boats and canoeists out on the water.

I took a little detour into the forest to visit the caged areas for wild boar and deer. There were even some adorable baby wild boar – so cute with their stripes! After a quick stop to the friendly deer I made it to the lovely Tegeler Hafenbrücke (Tegel Harbour Bridge) and crossed it to start cycling eastwards away from the Tegeler See.

The route followed the Nordgraben (North Ditch) which was a drainage system built between the World Wars. It was supposed to help the Panke river from overflowing during periods of heavy rainfall. However it was not well planned and negatively impacted the nearby natural water systems.

Cycling along the Nordgraben is a mixture of gravel trails and paved sections. These paved sections make up part of the Berliner Mauerweg (Berlin Wall Trail) between the Rosenthal and Märkisches Viertel (Märkish Quarter) districts. Along this stretch I encountered two couples with dogs who got into a very heated argument. I kept my distance and passed them both when things calmed down.

I followed a trail right down to the Nordgraben and decided it was a good time for a food break. I ate a homemade flapjack and decided to inject 1 unit of insulin as my blood glucose was higher than I liked despite the hours of cycling.

After this break, I cycled through more allotment gardens until I made it to Blankenburg. Here I cycled up the Mörderberg (Murder Mountain) – hardly a hill, let alone a mountain, and no murder to be seen. The rapeseed fields were starting to bloom their distinctive yellow, which is always a lovely sight.

From here I cycled next to the largest allotment garden in Berlin where all the streets are named after fairy tales such as Rotkäppchenweg (Little Red Riding Hood Way). Next up was the district of Wartenberg – the destination of Stage 6. I was greeted by the amazing sight of the cherry blossoms of the Japanischer Kirschgarten (Japanese Cherry Garden) in full bloom. Reminded me of the lovely trip with Nadja last year.

I soon reached the Seelgrabenpark (Soul Ditch Park) which indicated I was reaching the end of this lovely route. I cycled through the park along the Neue Wuhle (New Wuhle) until the Ahrensfelder Berge (Ahrensfelde Mountains) which I scaled in Stage 14. This was the end of the route and perfect timing for another food break.

Next to a field of Highland Cattle, I had an energy gel and an energy bar since the insulin I injected earlier was working as planned. After the food, I cycled through Marzahn and stopped for a coffee as well. I meandered my way home taking in plenty of new roads for my wandrer profile – including some lovely sheep in the Herzberge (Heart Mountains) park.

There might be another gap until I can do the next Stage since Nadja and I will be away for a week. We are typical German tourists heading up to the Baltic Sea. After that I will finally be trying out an insulin pump. I will have to see how I react to this change in diabetes management before taking on another Stage and the multiple hours of cycling it involves.