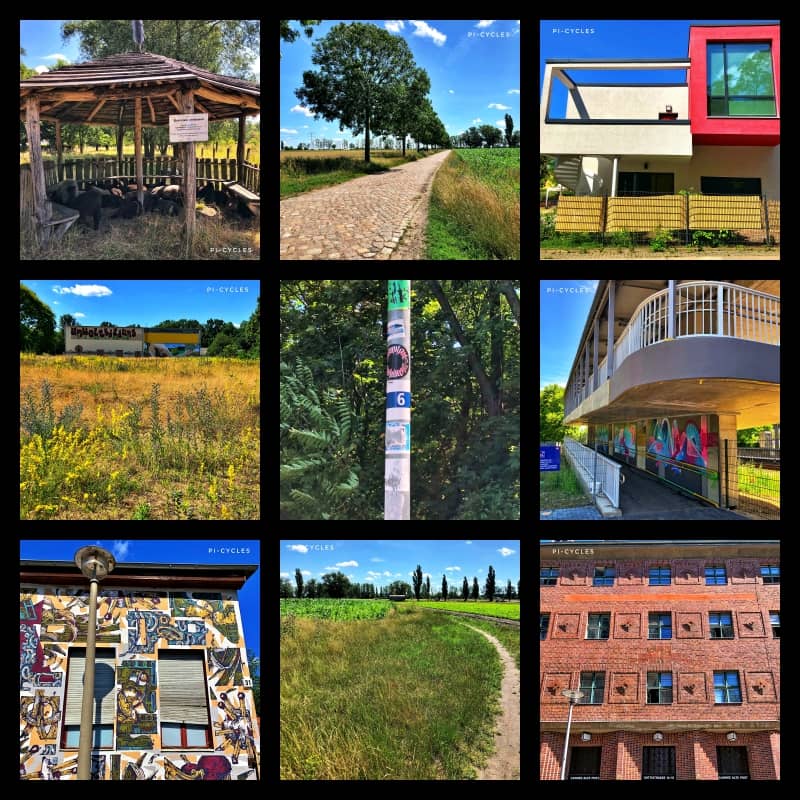 Nadja and I were back in Berlin after our weeklong trip to the countryside of Mecklenburg-Vorpommern and I took advantage of another hot day for the next Stage of this Grand Tour. This route would take me from the Rummelsburger See (Rummelsburg Lake) just to the east of central Berlin all the way to the fields on the border of Berlin and the town of Lindenberg.

After the week of relaxation, my blood sugar was generally pretty high and I was unsure how this Stage would impact it. So I slightly reduced both my basal and bolus insulin for breakfast and then made my way eastwards. I cycled through Kreuzberg and enjoyed some of the great murals that this district is known for. I also took a detour to the lovely Stralau peninsula where I injected 0.5 units of bolus insulin as my blood glucose was way too high at this point of the Stage.

The Rummelsburger See is bordered by the Stralau peninsula, so I could cycle along the lovely promenade towards the starting point of this Grüner Hauptweg. There were some great views of the Klingenberg Heizkraftwerk (Thermal Power Plant) that I explored during Stage 2 of the Tour de Tall.

The Grüner Hauptweg headed northwards towards the district of Lichtenberg by passing under the train tracks. Lichtenberg is full of the typical Plattenbau apartment blocks built by East Germany after the Second World War. The headquarters of the East German secret police, the Stasi, was located in one of these blocks. The block was the site of large protests after the fall of the Berlin Wall and is now the Forschungs- und Gedenkstätte Normannenstraße (Normannenstraße Research and Memorial Site).

In the middle of Lichtenberg, there is the lovely Landschaftspark Herzberge (Heart Mountain Landscape Park). After many of the industrial buildings in this area were no longer operational, the area was developed into a large park focusing on the flora and fauna native to this part of Europe. The park was one of the first in Berlin to use sheep for managing the field areas. I was delighted to see so many sheep, most were relaxing in the shade as it was pretty hot by this point!

The next section was not very green, as I had to cycle along and across some heavily trafficked roads – Rhinstraße and Landsberger Allee. After safely navigating this stretch, I was in the industrial area of Marzahn and in between some factories, there was a nice path near one of the irrigation ditches. This path ends up near a car junkyard with pleasingly stacked cars.

I left the industrial part of Marzahn and headed to more large apartment blocks in Neu-Hohenschönhausen. The Krugwiesen (Jug Meadows) make up a lovely green stretch full of trees and small fields that allow the residents to escape the city and enjoy some nature.

I soon left Neu-Hohenschönhausen for Wartenberg, so I knew that I was approaching the end of the Grüner Hauptweg. I navigated through some more residential streets before the large fields of the Landschaftspark Wartenberger Feldmark (Wartenberg Field Landscape Park) suddenly appeared. These fields were part of the large irrigation system and many of the fields are still used for farming – there was plenty of produce growing.

The Landschaftspark Wartenberger Feldmark stretches out all the way to the border of Berlin and Lindenberg, and it was here that the Grüner Hauptweg reached its end. My blood glucose was doing alright at this point but it was time to eat, so I ate an energy bar and injected one unit of bolus insulin. I made sure to rest in the shade as it was very hot in the sun!

After my break, I headed back home taking in as many new kilometres as possible. My legs were feeling pretty tired so I was happy this was not one of the longer stages of this Grand Tour. I think the combination of high blood glucose over multiple days and not riding a bike for more than a week played a part in this. Halfway back home, my blood glucose was dropping a bit too fast so I took on an energy gel for a boost so I could get back home safely.

This Grüner Hauptweg was a nice tour through some of the central parts of the former East Berlin. It was a mixture of green paths, Plattenbau apartment blocks and some stunning green areas developed on former industrial grounds. Spotting lots of sheep during a ride is always a nice bonus so I hope this happens in more Stages.