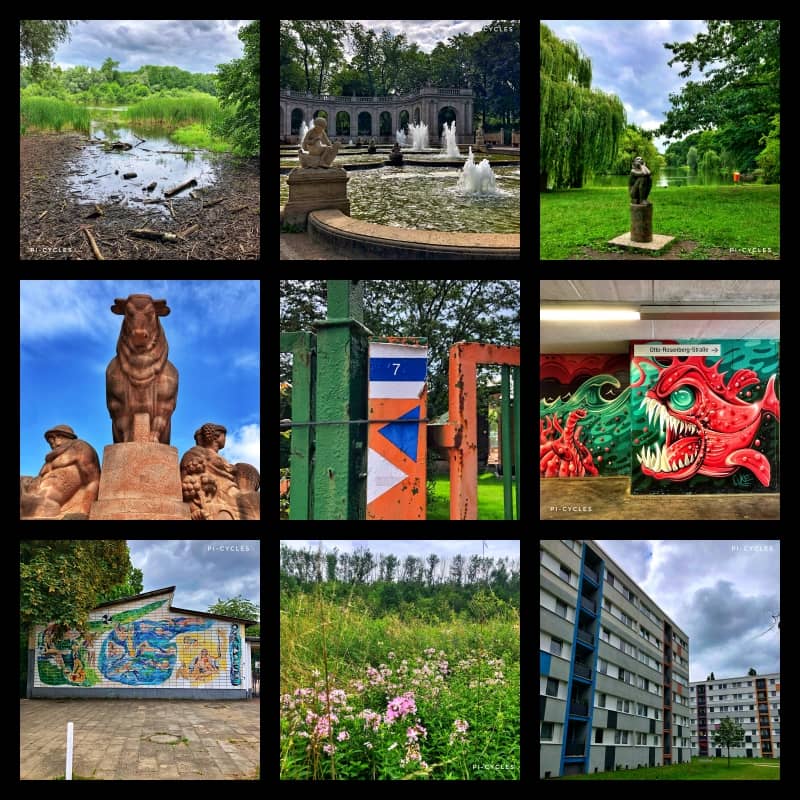 After the previous Stage, Nick and I cycled to Poland and back – just a little 220 km ride. This was my (and Nick’s) longest ever ride and, not surprisingly, I needed some extra time to recover. During the ride my blood glucose was extremely well behaved, but the days and nights after were quite the opposite. My blood glucose levels during the night were particularly unstable so I kept waking up multiple times to react to alarms from my CGM. This lack of decent sleep certainly prolonged my recovery.

On a positive note, I finally received the proper cassette for Flash so I could finally set up the new drive train. I managed to get Flash up and running, it is so nice riding a silent bike and I actually felt confident that I could push up some inclines without breaking poor Flash! This really put a smile on my face.

Now that both my body and Flash were ready for a Stage, I could check out the route from the lovely Märchenbrunnen (Fairy Tale Fountain) in central Berlin all the way out to the border between Berlin and Hönow to the Northeast. I was curious to see the green areas for this route, since it passes through districts of Berlin that are more famous for large apartment blocks than greenery.

I prepared myself for the Stage with my usual breakfast and coffee, plus a slight reduction in bolus and basal insulin keeping in mind this would be quite a long Stage. Once I was ready, I took a long route towards the Volkspark Friedrichshain (Friedrichshain Public Park) – where the starting point of the route is found – so I could nab some new kilometres along the way.

The starting point is at the Märchenbrunnen, a really lovely neo-baroque fountain originally built in 1913. It was damaged during the Second World War and restored in the 1950s after some of the original statues were found. The fountain was regularly vandalised and further restoration works were completed in 2007. The fountain is now locked during the night to prevent further vandalism.

The route passes through the lovely and popular Volkspark Friedrichshain, which is also the oldest public park of Berlin. The debris from the Second World War created the two hills in this park – the Kleiner and Großer Bunkerberg (Small and Large Bunker Mountain). I cycled up part of the Kleiner Bunkerberg to the eye-catching memorial Denkmal des polnischen Soldaten und deutschen Antifaschisten (Monument to the Polish Soldiers and German Anti-Fascists).

Not long after leaving the Volkspark Friedrichshain, I cycled near Arnswalder Platz (Arnswald Square) and a huge – and I mean HUGE – fountain caught my eye. The huge bulls – gotta be on some sort of steroids – and other figures are very impressive. The fountain was erected during the Nazi era, so I guess the very muscular bull says a lot about the image they tried to portray.

Next up was the nice Anton-Saefkow-Park before I had to cycle across and along some pretty busy roads before reaching the next larger green area – the Volkspark Prenzlauer Berg (Prenzlauer Berg Public Park). The Pappelplateau is another hill made from debris after the Second World War. I cycled up this pretty steep hill and enjoyed the shade from all the trees in this quiet park.

I cycled through some allotment gardens and then cut across a busy street – four lanes of traffic and trams – before cycling through the Sportforum. This is a large sports complex with areas for many different sports (such as swimming, handball and athletics) and also apartment blocks for athletes too.

Not far from here are two lakes – the Orankesee (Oranke Lake) and Obersee (Upper Lake). The area around these lakes has many villas, and back in the 1920s the residents of the area got their own lido at the Orankesee as well as a popular lakeside bistro too. After German reunification, these lakeside areas fell into disrepair and large-scale renovations were necessary before they could reopen to the public.

The Obersee is an artificial lake that is not suitable for swimming. The small island in the middle used to house a tea room that was reached via gondola! I only saw ducks around the island but the park has many sculptures around that add to the nice vibes of the area.

I carried on northwards towards the Faulersee (Lazy Lake). This lake is part of a nature reserve and it was really nice cycling through the lush trees. The lake is inaccessible except for a small viewing platform. A really nice spot not far from some busy roads!

I cycled through some of the very residential areas of Neu-Hohenschönhausen where the green areas were mainly small parks near train tracks or created for the residents to relax in. It was a similar story in Marzahn, where I needed to use the underpass of the Raoul-Wallenberg-Straße S-Bahn station to cross under the Märkische Allee street. The Gedenkort NS-Zwangslager Marzahn (Marzahn Memorial Site Nazi Forced Labour Camp) is right next to this underpass. Romani people were imprisoned by the Nazis and were either killed or forced to work in these camps.

The nearby S-Bahn station is named after Raoul Wallenberg, who was a Swedish diplomat who saved many Jews from the Nazis in German-occupied Hungary. The underpass has some fantastic murals, so I was really happy that the route made me take this detour. As a cyclist, I would tend to avoid routes that would make me carry my bike up and down stairways but this was definitely worth it!

Once on the other side of the busy Märkische Allee, I decided it was time for a break. I bought a coffee and had an energy bar while relaxing near the train station. My blood glucose was pretty high so I decided to inject 2 units of bolus insulin to help bring this down to a reasonable level.

On the way to Hellersdorf, I cycled through some of the large green areas between the distinctive Plattenbau blocks of Marzahn. These green areas were planned as rainwater reservoirs and look like a sunken pool with trees coming out. 🙂 Next up were meadows near the river Wuhle before I reached Hellersdorf.

The final large green area of this stage was the Hönower Weiherkette (Hönow Pond Chain). This is a lush area full of trees and very large nettles – some grew up to my waist! I didn’t see any water though – the ponds must be so small that they are dwarfed by the reeds and nettles. I weaved through the people out walking their dogs in this area and reached the Hönow U-Bahn station. This is the end point of the Grüner Hauptweg.

With the route done, I could make my way back home. I took the opportunity to weave through the estates here and enjoy some of the designs on the blocks. The insulin I injected started to kick in a bit too much and I needed to take a gel in Biesdorf for a good carb boost. This wasn’t enough carbs for the whole ride home, when I reached Lichtenberg I needed another gel and an energy bar.

This was a nice Stage to get me back on track with this Grand Tour. I really enjoyed cycling through the parks, up debris hills turned into green landscapes, near lakes and through the Plattenbau estates. A nice mix of the former East Berlin! The day after this Stage is when Nadja and I will get our second dose of the Covid-19 vaccine (Yayy!) so the date of the next Stage is dependent on any reaction to that.