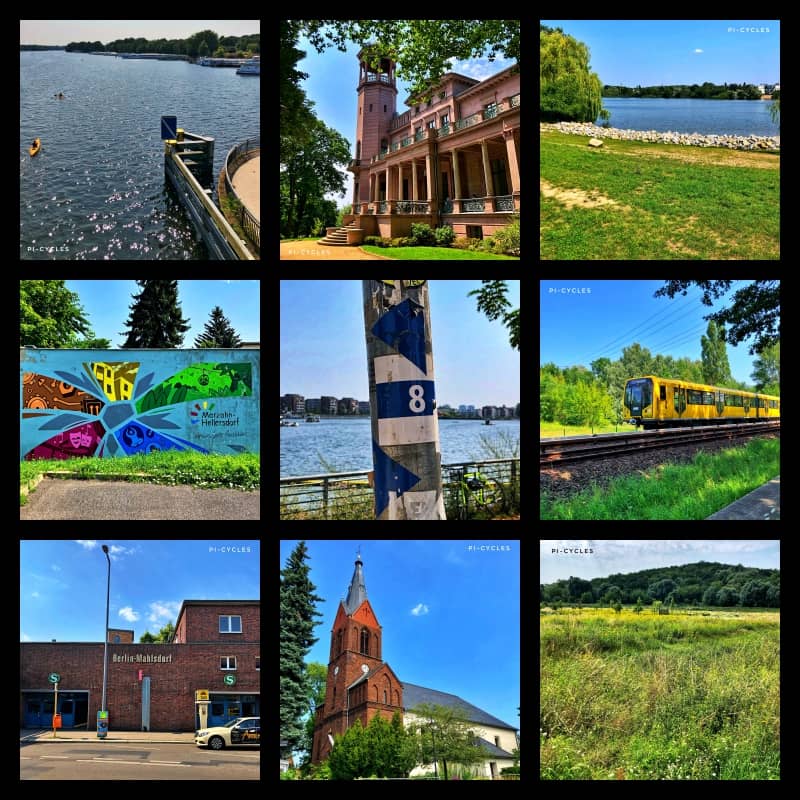 Nadja and I got our second Covid vaccine the day after the previous Stage, so I was feeling pretty weak a few days after that. Thankfully I was feeling well enough to fit in another Stage before we left for a week’s holiday at a mountain bike park in the Erzgebirge (Ore Mountains). This route would take me from the lovely Treptower Park all the way to the district of Mahlsdorf – or Pi-Dorf, as we like to call it.

It was going to be a hot and sunny day, so I made sure to put on sunscreen before I left. The heat was also a consideration in how much I would reduce my insulin for breakfast. I decided on only a slight reduction in both bolus and basal insulin and hoped for the best. The usual tactic of Type 1 Diabetics!

I headed out eastwards towards Treptower Park and took a detour through the lovely Viktoriapark (Victoria Park) before cycling to the Spree. I was on the opposite side of the Spree to the first Stage of this Grand Tour and could enjoy some great views towards central Berlin.

The official start of the Grüner Hauptweg is at the Treptower Park S-Bahn station. My blood glucose was starting to drop so I had an energy gel and bar before starting the official route. It was already getting pretty hot so I made sure to stay in the shade! Treptower Park is a very popular park with lots of people running and walking along the riverside promenade, which is also a harbour for the many sightseeing boats.

I crossed the Spree and cycled along the Rummelsburger See – this lake is a popular one during this Grand Tour – before heading into Rummelsburg. I cycled through some allotment gardens near the railway tracks and spotted some lovely wild berries! There is a really lovely cycle path along the tracks that lead into the district of Karlshorst.

I crossed the busy Treskowallee to use the fantastic path running parallel to the U5 tracks. I was now near the Biesdorfer Baggersee (Biesdorf Quarry Lake). This is an artificial lake created after the nearby housing was completed in the 19th Century. There were many people swimming in the lake even though this is not allowed due to the (lack of) water quality. The area around the lake is a nature reserve and was lovely to cycle through.

Next up was the Schlosspark Biesdorf (Biesdorf Palace Park). This park is full of huge trees which provided much needed shade from the sun. I stopped by the pink palace just as I did during Stage 56 of the Grand Tour de Öffentliche Verkehrsmittel.

I crossed the river Wuhle and was now in the district of Kaulsdorf – the main focus of this route. The gravel paths through the meadows near the Wuhle soon made way to huge cobbles of the historic part of Kaulsdorf. The impressive Dorfkirche Kaulsdorf (Kaulsdorf Village Church) is right in the middle of the village green – typical of how villages were historically designed.

After slowly navigating the cobbles, I cycled towards the Butzer See (Butz Lake). Similar to the Biesdorfer Baggersee, this lake was full of people swimming even though the water quality isn’t good enough for this. I quickly walked Flash through the sandy part – especially the FKK (nudist) section 🙈.

The Berliner Balkon (Berlin Balcony) is nearby and part of the border between the districts of Kaulsdorf and Mahlsdorf. It is a noticeable hill with views all the way to the Müggelberge (Müggel Mountains) to the south. There is a nice path with wooden signposts here that hark back to when there was a windmill at this location.

All that was left of this Grüner Hauptweg was to cycle towards the Mahlsdorf S-Bahn station. I was feeling pretty hungry and tired after all the time in the sun, so I ate an energy bar while shading under the train tracks. A well deserved break!

I cycled back home, weaving my way through new roads and paths. I’m not a huge fan of cycling in the beating sun so I was very happy to get home and rest in the shade. This was a lovely Stage with many lakes, meadows and even a palace. A great way to head into what will surely be a very active holiday.