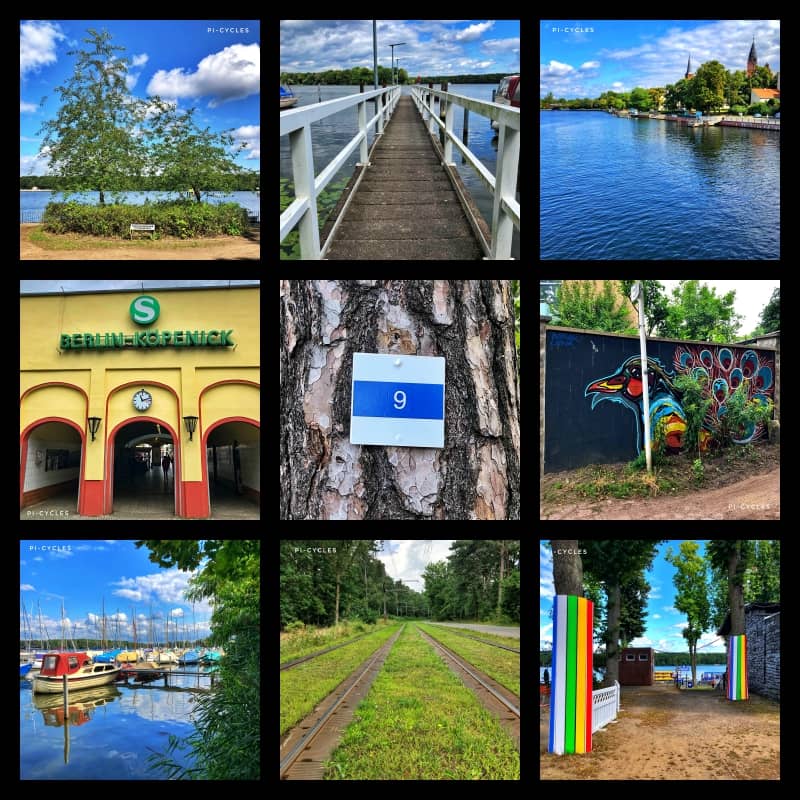 Nadja and I had a great holiday in the Erzgebirge (Ore Mountains) with her godson, despite me breaking my little finger 😬. I took my frustrations out on the handlebars of the rental mountain bike and managed to hit the screws joining the stem to the handlebars. Unsurprisingly, I lost this fight and needed a cast for two weeks. This meant I had a longer than expected break during the Grand Tour.

Now that I finally had the go ahead to cycle again, with my ring and little fingers still taped together though, I was very excited to get back out on Flash and visit some of my favourite areas in Berlin. The planned route followed the river Dahme from Köpenick towards Schmöckwitz and its border with Wernsdorf in Brandenburg.

I slightly lowered my basal and bolus insulin and optimistically put on sunscreen before heading out. I was expecting a windy day, especially on the way back, and overcast skies but maybe some rays of sun too. After the long cycling lay off, I was unsure of how my blood glucose would react to the long Stage so I made sure I had lots of carbs on hand – just in case!

The starting point of the Grüner Hauptweg was at the Köpenick S-Bahn station. On the way there I got a taste of the conditions I would be cycling in: sun followed by dark ominous clouds, the sun again and constant wind with some strong gusts. The temperatures were pretty much perfect for cycling though – not too hot and not too cold.

Before starting the route, I ate an energy bar at the Köpenick S-Bahn station. My blood glucose needed more carbs for the ride, even after I had to stop for an energy gel on the way to the starting point. The Grüner Hauptweg headed towards the lovely old town of Köpenick, which is also where the river Dahme flows into the river Spree.

I headed into the grounds of the Schloss Köpenick (Köpenick Palace). This baroque palace was built on a small island in the river Dahme and gave its name to the whole district of Köpenick. The Hohenzollern electors of Brandenburg used to live in the palace but now it is an art museum. The small palace garden is also lovely and has some interesting statues.

The route headed into the Wendenschloss area of Köpenick, on the eastern banks of the Dahme. This area is full of historical villas and more modern houses. It is also bordered by the Müggelberge (Müggel Mountains) forest in addition to the Dahme. A pretty nice area to cycle in.

The official route uses the F12 ferry to cross the Dahme into the Grünau district of Berlin. Since the sun was out, I decided not to use the ferry and rather cycle back up to the old town of Köpenick to reach the western side of the Dahme. The old town is so picturesque and this was a real contrast to the gloomy skies when I was first in the area just an hour before!

The path along the banks of the Dahme in Grünau is a lovely stretch of Berlin – full of water sport clubs. The rowing and canoe competitions from the 1936 Olympics were held here in the regatta course. This was built in the late 1800s and is still used as a training course for the numerous rowing and canoe clubs in this area.

I cycled along the picturesque tram tracks that connect Grünau and Schmöckwitz – similar to Stage 48 of the Grand Tour de Öffentliche Verkehrsmittel. This historical tram section was built in 1912 and expanded for the 1936 Olympics, to allow more spectators for the rowing and canoe competitions. This line also serves the villas of the Karolinenhof (Caroline Court) and the residents protested to keep these tram tracks. Since the tram line doesn’t have a high passenger load, there were discussions for the whole tram section to be removed instead of restored. Thankfully the city of Berlin fiscally helped out the BVG (the public transport company in charge of maintaining the network) and the tram line was saved!

The tram line has many stops near small sandy beaches, such as the Bammelecke, that are popular with bathers – on more summery days though! There are also places to rent boats too. There were plenty of moored boats and sailing boats in Schmöckwitz too. This is not surprising since this was historically a small fishing village before it was incorporated into Berlin.

I cycled through the historic old town of Schmöckwitz before crossing the Dahme and cycled along the banks of the Seddinsee (Seddin Lake). This is also the starting point of the Oder-Spree-Kanal (Oder-Spree-Canal) which connects the rivers Spree and Oder, forming part of the border between Germany and Poland.

My blood glucose was dropping here, so I ate an energy bar before the final section of the route. This was at Krossinsee (Krossin Lake) which is the border between Berlin and Wernsdorf, Brandenburg. I briefly inspected the small village church before cycling back through Schmöckwitz and Grünau towards home.

This was a fantastic route – a real mixture of forests and waterways. Every time I’m in the area, I’m reminded of how lovely it is to cycle in these areas of countryside away from the busy city centre. Another bonus was my blood glucose during this ride – it behaved as expected so I could eat at regular intervals without it going all over the place.