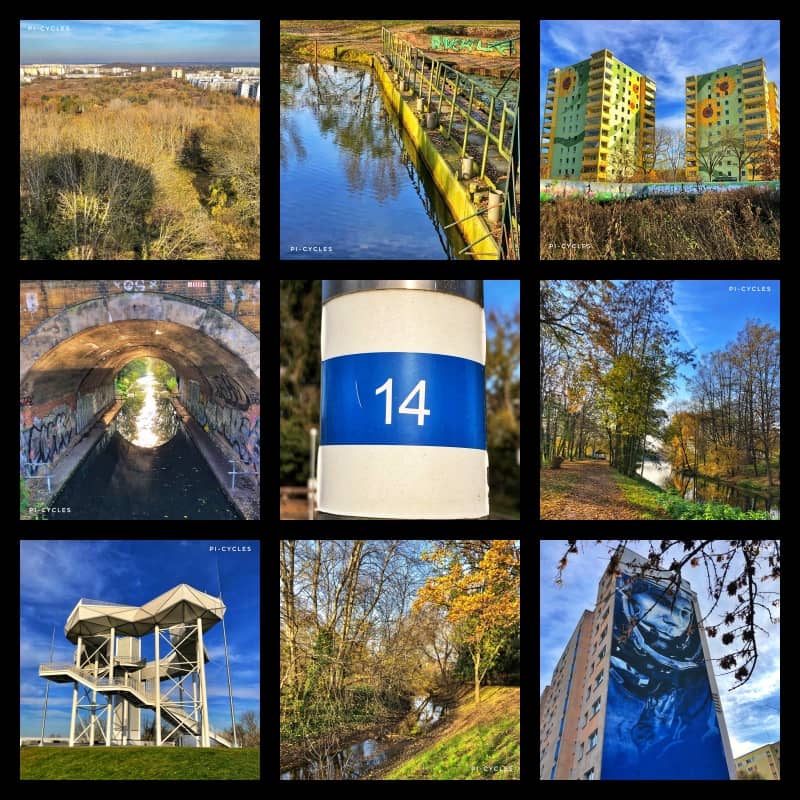 The route for Stage 14 of this Grand Tour was the one that I looked forward to the most. Back during Stage 35 of the Grand Tour de Öffentliche Verkehrsmittel, I realised there was a lovely route that followed the river Wuhle and made a note to cycle the entire trail – well this Stage would finally make that promise come true! Nadja and I have really latched on to the alliteration of “Wuhle Valley” and have been coming up with silly versions of saying these two words.I encourage you to try it – lots of fun 😀. Just keep in mind that when pronouncing “Wuhle” the German “w” is an English “v” sound and you need to say the “e” and the end.

I cycled towards the starting point of this route, which was also the end point of the previous Stage. This is where the river Wuhle enters Berlin at the border of Ahrensfelde and the Marzahn district of Berlin. I had an energy bar before starting the route and was disappointed that there were no Highland Cattle in the enclosure in the Eichepark (Oak Park).

The Eichepark contains the Ahrensfelder Berge (Ahrensfelde Mountains), which is a double-peaked hill. The rubble remaining after the construction of the large Plattenbau blocks that are synonymous with Marzahn were added to the natural elevation of the hill and so increased the elevation of these peaks. I cycled up both of the peaks and enjoyed the views – I could see all the way to the Fernsehturm (TV Tower) in central Berlin.

I carried on in the district of Hellersdorf and made a stop at the Yuri Gagarin mural – it is one of my favourites! The Wuhle Valley here is at its widest points with lots of trees and marshy areas all around. These lovely green areas make for a nice contrast with the densely populated blocks that are also common in this district of Berlin.

Before leaving Hellersdorf, I made a detour to cycle up the Kienberg (Kien Mountain). Similar to the Ahrensfelder Berge, the elevation of this hill was increased with construction rubble after building the many residential blocks in the area. The Kienberg was made into a public park with great views of the Gärten der Welt (Gardens of the World) park. There is even a cable car that runs from the park up to the top of the Keinberg. I also went to the top of the Wolkenhain (Cloud Grove) viewing platform for some spectacular views!

The next section of the Wuhle Valley route ran directly parallel to the river with some amazing autumnal colours. The yellows, oranges and reds of the leaves and their reflections in the water were breathtaking. I spotted quite a few herons at the river banks as well as the more typical ducks and coots.

The final stretch of the route was through the district of Köpenick where the Wuhle reaches the river Spree. This section certainly felt more urban than the rest of the route since I cycled through actual streets as there were no trails right next to the Wuhle. Crossing Lindenstraße, with its tram tracks and heavy traffic were also a stark reminder that I was still in the city.

Once I reached the end of the route, I had another energy bar and was very pleased with how well behaved my blood glucose was during this ride. I was starting to get a little chilly and so I had a coffee to warm up in the old town of Köpenick. I meandered my way back home to maximise the amount of new kilometres for wandrer.earth. This will most likely be the final stage of this Grand Tour for 2021 since the days are getting shorter, plus sunny days are at a premium! If that is the case, then this was a fantastic route to end 2021 on.