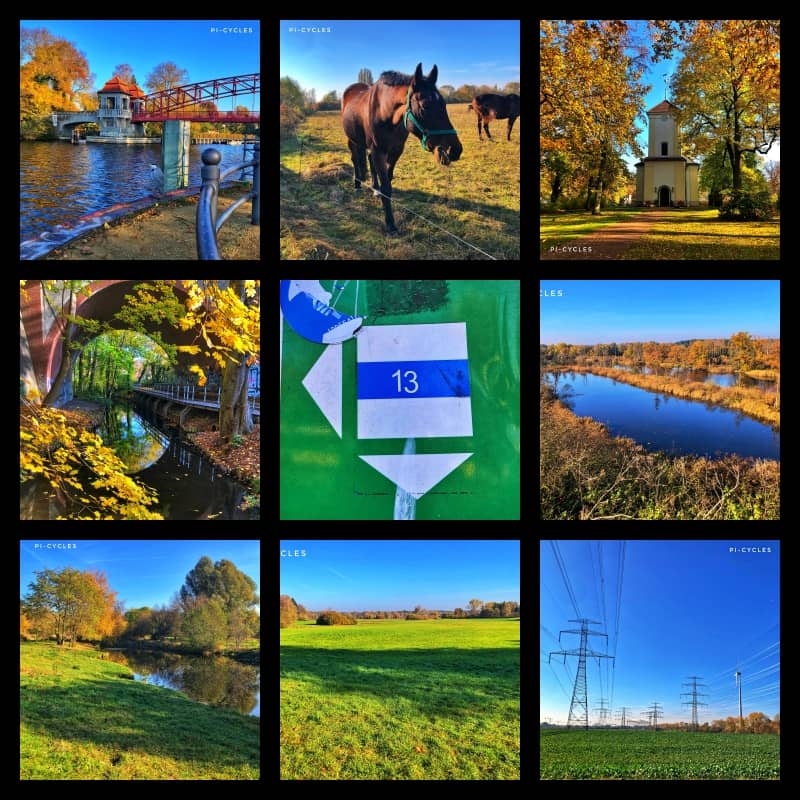 The weeks leading up to this Stage were ideal for autumn cycling – bright sunshine and mild temperatures. Obviously I took the opportunity to get out on a bike as often as possible plus I had the luxury of choosing the best possible day for the thirteenth Grüner Hauptweg. This route would take me across many of the northern districts of Berlin that are part of the Barmin plateau.

During one of my rides, I really battled to keep my blood glucose in range, since I had injected too much insulin before the activity. This was still fresh in my mind, so I was extra careful and erred on the side of caution before heading out. This meant that I injected half the amount of bolus insulin for breakfast as well as strongly reducing the basal insulin.

After these preparations, I was ready to cycle towards the Tegeler Hafenbrücke (Tegel Harbour Bridge). To get there, I cycled along the opposite side of the Tegeler See (Tegel Lake) than during the previous Stage of Grand Tour. I had also visited this lovely bridge during Stage 3 of this Grand Tour.

Before starting the route, I ate an energy bar since my blood glucose was trending downwards. My breakfast insulin calculations worked almost perfectly – yey! While at the Tegeler Hafenbrücke, I spotted a heron perched near a fisherman. The fisherman remarked that he gave the heron a couple of his fish – no wonder the heron was looking quite serene.

The morning temperatures were pretty chilly and I was struggling to properly warm up. Cycling through the shaded forest and all the stopping and starting while waiting at traffic lights certainly didn’t help. The section right before I reached the lush Tegeler Fließ (Tegel Stream) was particularly tough – long waits at red lights where I continually tried and failed to warm up my hands, despite wearing gloves.

Now that I was among the yellow trees of this impressive nature reserve, I started to thaw out, since I could cycle with a bit more oomph to get the blood flowing. I could finally see the water buffalo that live in this nature reserve, they were rightfully enjoying the morning sun while huddled together for warmth.

I was really enjoying the bike paths and trails running through the meadows. Unfortunately it was so nice that I had to keep stopping to take pictures. This meant taking off a glove to use my phone, so I was still pretty chilled. I was so happy to reach the fields of Lübars – no shade whatsoever, so with the sun out I could thoroughly warm up!

Stage 4 of the Grand Tour also took me to Lübars and the quaint Lübarser Dorfkirche (Lübars Village Church), Giving me the chance to compare the autumnal colours of this Stage to the lush green from my previous visit.

I was aware of the horrendous cobbles in Lübars from this previous visit, so I was well-prepared for this rough section of road before I could cycle on the trails of the Niedermoorwiesen (Lower Moor Meadows). I took a detour to the viewpoint of the Köppchensee (Köppchen Lake) – so idyllic!

The trails in the Blankenfelde district of Berlin took me through some wonderful nature including the Schwarzwassersee (Black Water Lake). There are also lots of stables and horse riding schools in the area too. I saw plenty of people on horseback or simply walking horses through the woods.

I cycled northwards towards the northern part of the Berlin Autobahn ring and greeted the wind vanes from Stage 3 of the Tour de Tall. My next hit of nature were the Karower Teiche (Karow Ponds). These ponds have some impressively large trees as well as the typical meadow-scape. There are also water buffalo in this nature reserve, but I did not encounter them during this Stage.

I carried on eastwards along the northern border of Berlin and Brandenburg, where there are large areas of fields for farming. The end point of the Lindenburger Weg from Stage 6 was also along my route. The trails I cycled along mainly followed the irrigation ditches that were created in the late 1800s.

In particular, the irrigation fields in Falkenberg were created to filter the human waste and use the resulting manure for fertilising these very fields. In the 1950s and 1960s, the water was polluted and so a sewage treatment plant was built. Then in the 1990s these fields were made into a nature reserve allowing nature to return.

The final stretch of the Grüner Hauptweg led me through the streets of Marzahn with many plattenbau blocks – quite a contrast from the endless fields and woods I came from. Here the end point of this route was at the border of Berlin and Ahrensfelde, in Brandenburg, right at the banks of the river Wuhle. This is also the starting point of the next Grüner Hauptweg!

With this Grüner Hauptweg complete, I was feeling a bit peckish and ate another energy bar before starting the way back home. I once again didn’t inject any insulin since I thought the cycle back would compensate for the increased blood glucose from the energy bar. On the way back, I stopped at a nice Café and bought a tasty choux pastry to go with a well-earned coffee. I planned to inject some insulin as my blood glucose was higher than I would like, unfortunately, during my fumbling about with my insulin pen it ran out of insulin so I couldn’t inject any! This meant I had extremely high blood glucose on the way back – certainly not ideal but I managed to get home safely. First thing I did was inject some bolus insulin!

Besides the insulin debacle at the end of the ride, this was a fantastic Stage through changeable landscapes – meadows, fields and former sewage irrigation ditches. It really showed a different – greener – side to Berlin which is the aim of these Grüne Hauptwege!