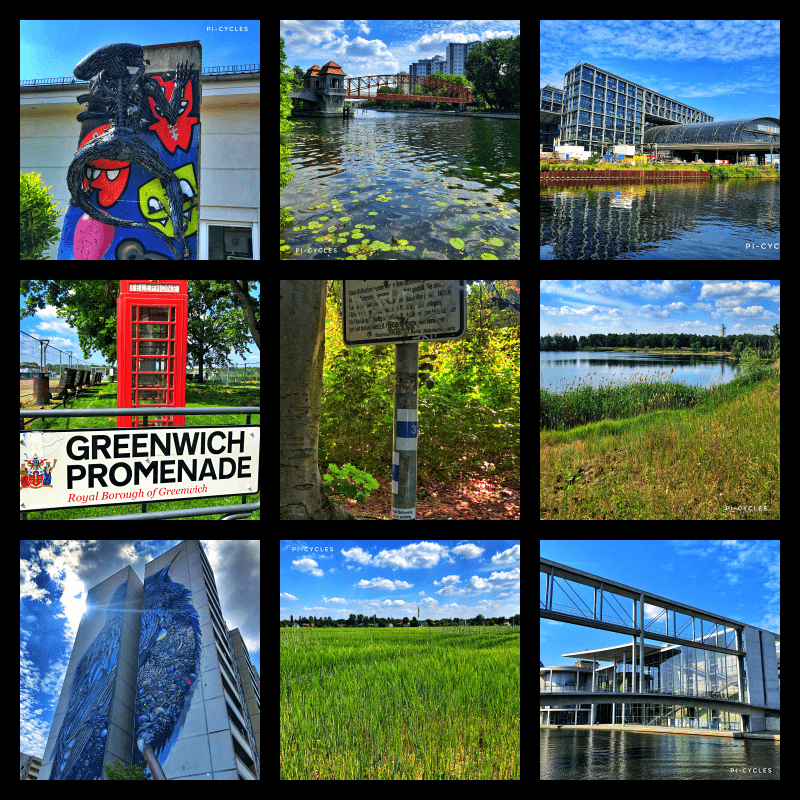 My struggles with high blood glucose after the first two Stages of the Grand Tour de Grüne Hauptwege had improved.  So I was very happy to get the chance to test my body out on the next Grüner Hauptweg. This route would take me from central Berlin out to Heiligensee (Holy Lake), a northwestern district of Berlin that borders the neighbouring state of Brandenburg.

I had my usual breakfast and this time didn’t reduce my bolus or basal insulin as much as I had before the previous Stages of this Grand Tour. The main reason being that it was going to be another hot day for cycling and I thought the heat was leading to higher blood glucose, so I needed more insulin in my body to avoid going as high while out on the bike.

After these preparations, I headed out to the start of this Grüner Hauptweg in the heart of the government district of central Berlin. The official starting point is on the Marie-Elisabeth-Lüders-Steg (Marie-Elisabeth-Lüders-Footbridge) that connects the Marie-Elisabeth-Lüders-Haus and Paul-Löbe-Haus, both modern government buildings, across the Spree. Marie-Elisabeth Lüders was a politician and women’s rights activist who was also one of the first women to receive a PhD from a German university, once women were allowed. She was a member of the Reichstag, with Paul Löbe as president, before the Nazis came to power, and both were imprisoned during the Second World War and then re-entered the Reichstag afterwards.

The Parlament der Baume (Parliament of Trees) is a memorial to the people who died trying to cross the Berlin Wall, which ran along this section of the Spree. It was installed in November 1990 right after the fall of the Wall by Ben Wagin and is now a registered monument. It is very moving to see a monument commemorating the government sanctioned killing of its own citizens right next to the walls of the current powers that be.

I followed the route towards the district of Wedding along the a small section of the Berliner Mauerweg (Berlin Wall Path) that runs next to the Berlin-Spandauer-Schifffahrts-Kanal (Berlin-Spandau-Shipping-Canal). This route continues along this waterway all the way to the Plötzensee (Roach – the fish not insect – Lake). Thankfully there is a really nice cyclepath through different parks so I could avoid the main roads.

Plötzensee is a popular swimming lake and one section of its banks even has a lido. Nick and I met up for a walk the Sunday before this Stage and this lake was full of people! This Stage was on a Friday morning so it was a lot more peaceful and there were fewer groups of teenagers to avoid.

The route passed through the lovely Rehberge (Deer Mountains) park before I crossed the very busy Kurt-Schumacher-Damm. The Rehberge park has designated wildlife areas but I didn’t see any in the fenced off area – disappointing. The former Flughafen Tegel (Tegel Airport) is in this area, and I cycled through streets that were very popular with plane spotters when the airport was still operational.

The next green area was the Jungfernheide (Maiden Heath) and the Flughafensee (Airport Lake). I had to cross the very busy Seidelstraße in order to get to this area – this was not a fun experience and better bicycle/pedestrian infrastructure is needed to make this safer. Once in the green area, I soon forgot about the cars and streets and enjoyed the lakeside views and marvelled at the amount of sand I had to carry Flash through!

I cut through the lovely forest and headed straight to the banks of the Tegeler See (Tegel Lake), which is always lovely on days like these. Not all areas of the lake are safe for swimming, cyanobacteria have been an issue for many years – with dogs especially at risk from dying. However, in the waterski section of the lake, there was a pretty proficient waterskier out on the waters – very impressive.

I took a small detour to check out some of my favourite street art in Berlin. The Starling piece is just incredible and it was also nice to see a new piece from Urban Nation installed too. I took a break at the Greenwichpromenade (Greenwich Promenade), this is the main harbour for the passenger ships offering tours around the lake and its islands. The district of Tegel is twinned with the district of Greenwich, which explains the name and the distinctive red telephone and letterboxes.

My blood glucose was doing well, so I didn’t inject any bolus insulin for my flapjack. After this quick break, I crossed the lovely Tegeler Hafenbrücke (Tegel Harbour Bridge) and carried along the northern banks of the Tegeler See. I was now in the Tegeler Forst (Tegel Forest) and again tried to spot some Mufflons in their dedicated area, but none were to be seen.

It was fantastic cycling through the Tegeler Forst and its absolutely huge trees – so peaceful! I had to navigate the sandy paths of the Baumberge (Tree Mountains) nature reserve before reaching the district of Heiligensee. Although it’s not really that far from central Berlin, it feels very different – wheat fields and large residential houses with gardens are not common in central Berlin.

The final stretches of this route were along one of the irrigation ditches of Heiligensee. The route ending at the Heiligensee S-Bahn station. My blood glucose was very high after my flapjack, so I injected one unit of bolus insulin to help bring it back down.

With the third Grüner Hauptweg complete, I cycled back home taking in plenty of new roads for my wandrer.earth score. I enjoyed some more time in the trees of the Tegeler Forst but by the time I got to Jungfernheide, my blood glucose was dropping pretty fast so I needed a gel to get me back home safely.

This really was a great ride through some fantastic forests and along the beautiful Tegeler See, making it a fantastic connection between the outskirts of Berlin and its centre. Crossing the main roads was mainly fine, as there were dedicated pelican lights, but Seidelstraße really needs something of the sort to really nail this route.

The % distance I cycled in each district
Tags:BerlinCharlottenburgCharlottenburg-NordGrand Tour de Grüne HauptwegegravelHeiligenseeMitteMoabitReinickendorfSiemensstadtTegelTiergartenWedding