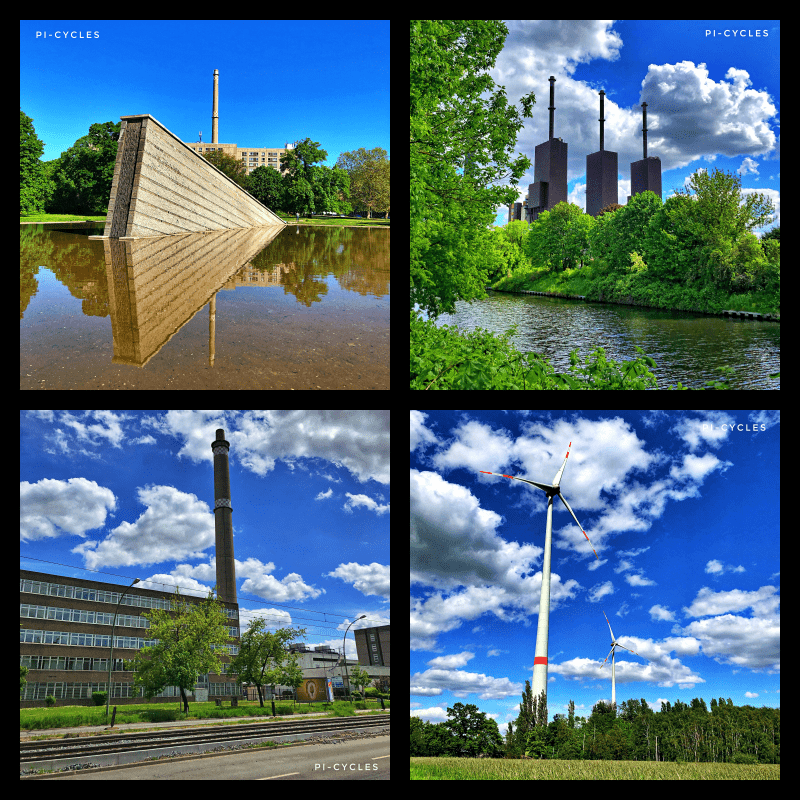 Stage 3 of the Tour de Tall would take me to some districts on the outskirts of Berlin so favourable weather conditions and a public holiday were the perfect combination. I prepared myself for the ride ahead with the usual breakfast of porridge and coffee while reducing my basal and bolus insulin.

All that done, I cycled towards the Heizkraftwerk (thermal power plant) near the Hauptbahnhof (Central station). I was loving the practically empty streets and sun – the roads to the Hauptbahnhof are normally full of cars so this was a nice change.

This power plant was originally built in 1979 to help provide power for the large Charité hospital grounds. The nearby ministries, except the new Bundesnachrichtendienst (German Federal Intelligence Services) building, and residential buildings also use power from this plant.

After this visit to central Berlin, I headed southwards towards Lichterfelde. Along the way, I passed some wonderful murals in Kreuzberg. At one of these murals, it looked like two artists were preparing for a new section. I look forward to seeing what will be there next!

During my way along the Teltowkanal (Teltow Canal), I made a point of stopping at one the icons of Brutalism in Berlin – the Forschungseinrichtung für experimentelle Medizin (Research Facility for Experimental Medicine) or as it’s more commonly known the Mäusebunker (Mouse Bunker). This building was completed in 1981 and was initially used for medical experiments involving animals. Thankfully this is now longer done, so much so that the building is not really in use and is under threat of demolition. I really hope the building is registered as a monument to save such an iconic building!

The Heizkraftwerk Lichterfelde was built to provide power to the southwest districts of Berlin. I first came across the three distinctive brown stacks of this power station during the Grand Tour de Öffentliche Verkehrsmittel. This plant was upgraded from coal to natural gas and steam as its power source in 2012.

Since then, one of the tall stacks is no longer in use and in the long term, all three should be demolished by 2025. I will be very sad to see these stacks disappear from the Berlin skyline! I distinctly remember while cycling the Berliner Mauerweg (Berlin Wall Path), how cool it was to recognise these stacks from across the fields.

I made a detour to the Kirschblütenallee (Cherry Blossom Avenue) that Nadja and I visited to check up on its status just a few weeks after we were there. This would also be perfect timing for a food stop. There were no traces of blossoms on the trees – just a lush orchard. I had a homemade flapjack and injected half a unit of bolus insulin as my blood glucose was surprisingly steady.

After this refreshing break, I cycled towards the eastern district of Marzahn. Once again, I relished cycling through central Berlin on this public holiday with the reduced amount of cars.

When this power plant was originally built in former East Berlin, it was a Waste-to-Energy plant that unfortunately didn’t have proper exhaust filtering. As you’d expect, the nearby residents were displeased with the toxic emissions and eventually this plant was extensively upgraded to a more environmentally friendly power plant.

In 2010, the plant was completely removed from the Berlin network and came back online in June 2020 after being equipped with the latest technologies. It now uses a similar natural gas and steam system as the Heizkraftwerk Lichterfelde that I had just come from.

The final structures for this Stage were the wind turbines in northern Berlin. On the way there, I was on the lookout for a place to stop for some coffee – it was time for a little break. I bought a coffee from a Döner place in Neu-Hohenschönhausen and also ate an energy bar.

After the carb and caffeine boost, I cycled through some lovely paths between fields and forests. These paths were pretty full with families also out on bicycles enjoying the lovely weather and countryside.

The last stop on this Stage, and the final structure in the Tour de Tall related to energy supply, were the wind turbines in northern Berlin. Berlin and its surrounding state, Brandenburg, are very flat so wind farms are quite a common sight in the countryside. Northern Berlin is probably the only viable area in Berlin that has enough space for the huge wind turbines that are part of the renewable energy supply.

This wind farm has a total of 5 turbines, most of which were rotating since it was pretty windy when I was there. The sound of the rotating turbines was very impressive! I also felt very tiny compared to these giants – still only the fourth tallest structure in Berlin though.

In the shade of one of the wind turbines, I ate another energy bar as I was feeling a bit hungry. Since my blood glucose was a little on the high side, I injected 0.5 units of bolus insulin before meandering back towards Charlottenburg. This proved to be an unwise decision, as by the time I reached Pankow my CGM alerted me that my blood glucose was now too low. So I had a gel for the final boost of carbs before cycling home safely. Just one more Stage to go where I’ll visit the top three tallest structures of Berlin.