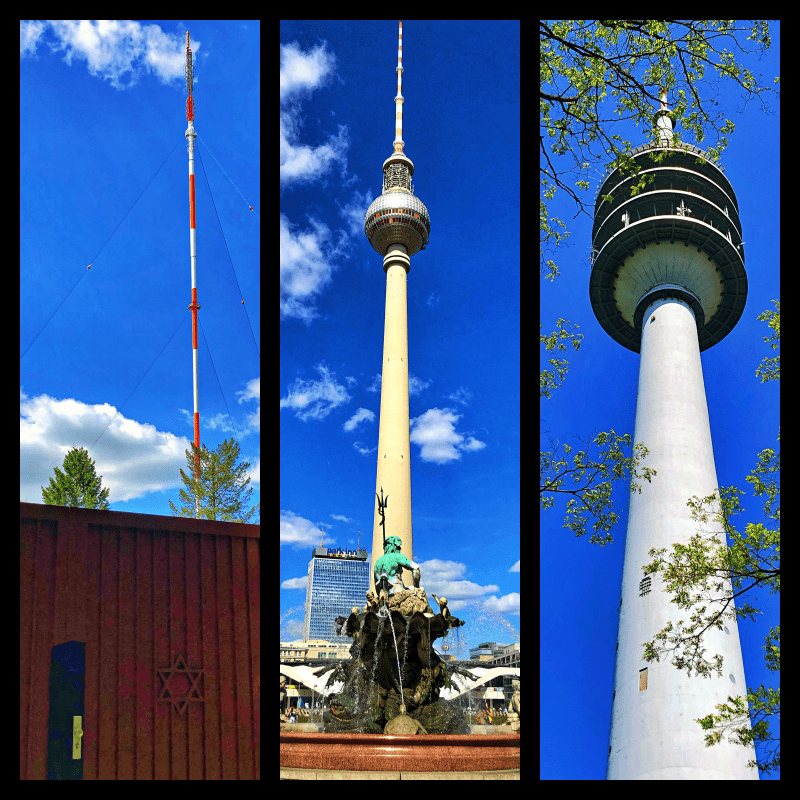 After the exertions of Stage 3, I needed some days of rest and recovery. Thankfully the weather made this easier since it was pretty windy and grey. Sun was finally on the cards for the weekend, during which Nick and I had planned for a long ride out into Brandenburg on our road bikes. Unfortunately, his knee wasn’t up to a long day of riding, so we postponed that ride until he’s sufficiently recovered. That however meant I could finish off the Tour de Tall in style with some pretty perfect cycling conditions!

The first two stops of this final Stage would allow me to take full advantage of using Severus, since I could cycle through the large forests in the Southwest of Berlin. Cycling through Grunewald was stunning – lush green trees and barely anyone about!

I headed towards the banks of the Wannsee lake to dip my hand in the waters. It wasn’t as cold as I expected, but I’m not going swimming just yet. Across the Wannsee waters, I could see my target tower peeping out from the trees of the Düppler Forst (Düppel Forest). Around Wannsee, there were now plenty of people enjoying the day around this picturesque area of Berlin which is always popular for a daytrip.

The distinctive tower is located atop the Schäferberg (Shepherd Mountain) which is a hill right before leaving Berlin and heading into Potsdam. This is a very popular hill for road cyclists as it has a great road surface, wide cycle paths and an actual incline! In order to get closer to the tower, I strayed into the forest paths up the Schäferberg instead of the smooth asphalt.

This tower was built with multiple antennas to send signals from West Berlin across East Germany, that surrounded West Berlin, into West Germany. Since reunification, the tower has been equipped for mobile radio, public and private broadcasts.

I took the long way towards the second highest structure in Berlin so I could visit plenty of lakes and maximise my time in the Grunewald forest. There were some rowing boats on the Schlachtensee (Battle Lake), a very popular swimming lake, and lots of people walking around it too.

In the forest, many dog owners let their dogs run about off leash, the majority of which quickly get their dogs out of the way so I can safely cycle by. But one group of people kindly moved to the side but didn’t stop their dogs from chasing each other across the path. I had to come to a stop and when I started off again, I lightly hit one of the dogs with my front wheel. Thankfully nothing at all serious, but it certainly wasn’t as funny as most of this group thought – pretty dangerous for me and their dogs!

I safely made it through Grunewald without further dog or person incidents and made it to the Sendemast Scholzplatz (Scholzplatz Transmission Mast), sandwiched between two cemeteries – the British War Cemetery and the Jewish Cemetery. This mast transmits the radio (analogue and digital) and television signals from the rbb (Rundfunk Berlin-Brandenburg – Berlin-Brandenburg Broadcast) station. It was built higher than originally planned so as to achieve a wider range across East Germany and into West Germany.

It was quite difficult to get decent photos of the mast through the tall leafy trees but it was a really nice and quiet area to be in. In this green oasis, I stopped for another food break and had a Clif bar. The insulin I injected earlier was working as I hoped, so I ate the Clif bar without injecting any more insulin. It’s great when these decisions work out!

The final stop on the Tour de Tall was to one of THE symbols of Berlin – the Fernsehturm (TV Tower). This is right in the centre of Berlin and I meandered my way there to take in some murals while avoiding people in the very busy parks.

The Fernsehturm is not only the tallest structure in Berlin but also in Germany. The central location of the tower was decided by the East German government to symbolise communist power and create a new distinctive landmark in Berlin. Its location is not too far from the former Berlin Wall and would be seen from practically all of West Berlin. The sphere at the top of the concrete column was inspired by Sputnik, Earth’s first artificial satellite.

Since reunification, the Fernsehturm has become a symbol for Berlin as a whole. It’s hard not to find images of the Fernsehturm on anything representing Berlin – even the covers to the underground utilities include a prominent Fernsehturm.

The tower is still used for transmitting many radio and television stations and it also contains a viewing platform and a rotating restaurant for spectacular views of Berlin. The Fernsehturm can also be spotted from the outskirts of Berlin – even from the wind vanes from Stage 3 that were far away from the city centre.

As expected, Alexanderplatz and the area around the Neptunbrunnen (Neptune Fountain) were full of people enjoying the glorious sunshine. I really appreciated how tall the Fernsehturm is since it was very difficult to get all of it plus the ground structures in shot. It’s certainly number one on the Tour de Tall for a reason!

With that I had ticked off each of the seventeen tallest structures in Berlin and all that was left was for me to cycle back home. This was a great Tour where I visited many icons of Berlin’s architecture and could explore plenty of off-road sections along the way too. There will be more architectural based Tours in the future, but first I will take on a twenty Stage Grand Tour that will follow the dedicated Grüne Hauptwege (Green Main Routes) of Berlin.