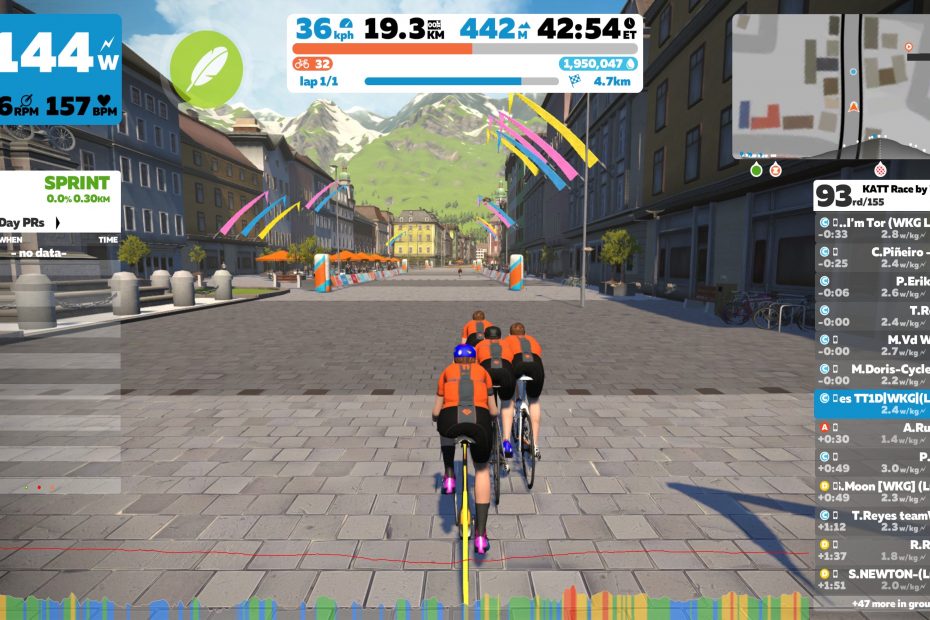 The next scheduled race in the WKG Winter Racing League was an edition of the WKG KATT race that runs every Monday evening. Thankfully, I also can’t stress enough how thankful, this edition was NOT going up the Alpe de Zwift. I don’t think any of us wanted to do that again after the efforts during the previous race on the Four Horsemen course.

Instead we were taking on the Innsbruck 2018 UCI course which incidentally is also the course set for Stage 17 five days later. I am thinking of cycling outdoors rather than complete Stage 17 so I wanted to go full blast for this course since it suits my racing style. After only 4 km, we head up the Lutscher climb which is about 7.5 km long with an average gradient of 5 %. Once the descent is over, the course makes for the short Innsbruck circuit loop that also includes a little kicker of a climb before heading through the sprint section and rolling through to the finish.

With such a climb so soon after the start, I knew I needed a good warm up. Nadja arrived back from work during my warm up and I gave her some lovely sweaty cuddles since she was feeling quite overwhelmed with work that evening. I was keeping an eye on my blood glucose before the race as it definitely needed to be on the high side (~180 mg/dL) at the start as I knew that racing full gas up the climb would make my blood glucose levels drop fast.

The usual fast start came about and I managed to keep with a large group that included some of the strong C category riders – plan going well! I was trying to keep in the draft as much as possible to save some energy for the imminent climb. As expected, once we hit the Lutscher climb the group started splitting up. I started pushing on the lower gradients and was able to keep in touch with some of the stronger C category riders for a short time.

On the flatter sections of the climb – a gentle 4-5 % compared to the 8-9 % gradients, I was trying to rest but not let off the power completely so as to hold my position. I was sandwiched between riders which was motivating to push just a little more and my legs were doing a pretty good job! My blood glucose was dropping pretty fast, as expected, by the halfway point of the climb so I took on an energy gel for a quick boost of carbs to carry me through the rest of the stage.

My legs were really hurting by the time I got close to the top of the climb – there was a lot of huffing and puffing from me, and I couldn’t wait for the descent to rest my legs. The Lutscher climb is quite interesting since it has quite a long flattish section before the apex, most climbs tend to have a mean steeper section right before their apex.

I was part of a group of four during the descent, which was great as I usually lose a lot of time when descending solo. I also soft pedalled for the whole descent to keep the legs loose and avoid the failure that I experienced after the Alpe descent in Stage 15. My quartet stayed together until the short kicker climb of the Innsbruck circuit. I luckily had a feather power-up so I could stick with the rest of the quartet – who obviously upped the power to try to drop weaker riders before the end. In fact this tactic did work since one rider couldn’t keep up and I was now part of a trio for the rest of the race.

I was trying to decide on tactics for the final kilometre of the race. Since it’s unlikely that I would beat either of the two men in my trio in a sprint finish, I opted for a long range effort starting about 700 m from the finish. This started off well as one rider didn’t count on this but the other did. I also overestimated the power for the distance and soon faded ending up third of this trio. I will definitely learn from this!

I was really really happy with how this race went. I felt very strong, my blood glucose was reacting as I expected and my race tactics went pretty much to plan! I managed to beat quite a few C category racers as well which is a huge bonus. Given how well this race went, it’s quite unlikely that even if I did race Stage 17 on this same course, I could do better!