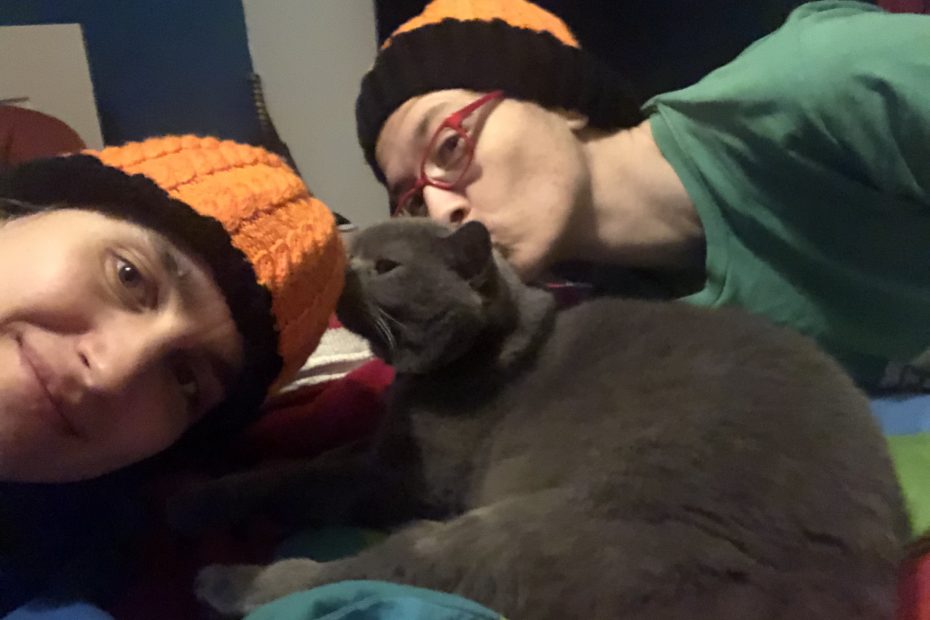 This was the race that we were all worried about. The Queen Stage of the WKG Winter League. Just the small matter of the Four Horsemen route, where these Horsemen are the four climbs of Watopia – Hilly KOM, Volcano Climb, Epic KOM (including the bonus climb up the Radio Tower) and Alpe de Zwift. That leads to over 2000 m of climbing in less than 90 km!

This was going to be a long day on the indoor trainer, so I filled up practically all of the water bottles and brought out all of the energy bars left from the fridge. Pi also inspected the makeshift food stand and gave it a paw of approval. I injected a slightly lower amount of bolus insulin for my breakfast, which I ate about two hours before the start of the race.

My tactic for the race was just to ride steady and at my own pace in order to finish in the least amount of pain possible. I certainly didn’t want to lose any precious energy reserves by chasing down any other riders. I also didn’t warm up before the race since this was not going to be a full gas start.

The first horseman was the bump in the road that is the Hilly KOM, typically in a race it would take me between 2 and 3 minutes but today this was just about conserving the legs for the longer climbs coming up. I overtook some riders here and after the climb, I stuck with a group that eventually pulled back to Nadja’s group. Nadja’s tactic was to finish the first 3 horsemen and then take a lunch break before the final Alpe climb of the race.

We stuck together in the same group until the second horseman – the Volcano Climb. About halfway up this climb, we both ended up riding solo and it stayed that way for both of us for the rest of the race. This again is not a huge climb, during this race it took me about 12 minutes, but at least the longer descent meant some more rest for the legs.

Next up was the Epic KOM, one of my favourite climbs in Zwift, much more of a challenge and today it took me 40 minutes. I managed to catch up and pass some of the D category riders during this climb which was nice. I assume that this was the third horseman but I’d argue that the ‘bonus’ climb or as it’s better known – the Radio Tower climb – should be the third horseman.

The Radio tower climb is brutal. It’s ‘just’ over 1 km long but with gradients consistently over 13 % and no respite whatsoever. It’s a huge grind and whenever you look at the screen it’s like you haven’t moved at all! At least the downhill is nice.

Now that I had made it down the Epic KOM, next up was the left turn towards the Jungle Circuit and it’s ominous right hand turn up to Alpe de Zwift. A now infamous Zwift update increased the rolling resistance in the jungle meaning that it’s now quite an effort just to get to the Alpe punishment! But we get to see a sloth and admire the great graphics that Zwift created for this section.

Finally the Alpe – that fourth and final horseman – was upon me. I went into this race thinking that it would end at the top of the Alpe but no the torture did not end there. After climbing this mountain we would have to continue on until the finish at the Watopian pier. This didn’t help my motivation levels when Nadja had pointed out earlier on in the race that we would most likely not finish at the top of the Alpe. But I’m glad she did as it would’ve been even more demotivating getting to the top and the race not ending!

I started out pretty strongly on the lower but steeper sections of the Alpe and managed to pass one or two riders. I think that the radio tower climb is harder than these lower Alpe sections, it just feels more demoralising as with the Alpe you get mini-rests at the bends. Once I was about 7 bends up the Alpe, I decided to rein back a little as I knew that I would not be able to keep up the effort all the way to the top.

I think this was the toughest Alpe climb that I have done so far on Zwift. I normally can distract myself from the pain in my legs quite easily and just get through it but today this was really really tough. I even considered stopping quite a few times. I persevered and managed to get to the top. It was my slowest time at 1 hour and 36 minutes but I did it without stopping. The Wheel of (Mis)Fortune at the top gave me another useless Helmet but the next sector would have been those Meilenstein wheels that I’m still dreaming of!

I slow-pedalled round the top of the Alpe before being able to get off the bike for the descent of the Alpe (this doesn’t require any pedalling). The end of the descent came along too quickly and I had to get round the rest of that bloody jungle! This was really really tough – my legs were not at all happy with me. Perhaps if I had continued pedalling down the Alpe, it might have been a bit easier to continue.

Eventually the jungle circuit was over and I could get back to the main island of Watopia for the final few kilometres through the Italian village and the esses. I was keeping an eye out of the rider behind me as I could see that he was trying to put some pressure on me. Thankfully I had enough of a time difference at the end of the Alpe that I could finish ahead without any huge worries.

I was very happy with my blood glucose during this race, I ate 2 energy bars before the Alpe and had an energy gel during the final part of the jungle circuit. But after the race, my body was not happy with me at all! I could feel that my tummy was feeling rather unsettled after the activity. I’ve experienced this many times during my football years so I knew that this happens to me. But I decided to drink my protein shake afterwards anyway – this was a bad idea as I was fighting the urge to bring it back up. Unfortunately, about an hour after the race, my tummy won this battle and I had to throw up. I feel that I well and truly lived up to the motto of the WKG racing league: FUN | PAIN | TORTURE | VOMIT! I’m still wondering when the Fun was though. 😉

Nadja finished her lunch break and was really debating whether to get back on the bike for the rest of the race. She did carry on – this is a huge victory as it’s very hard to start again after a longer break. She was distracting herself from the Alpe climb by watching Brooklyn99 – a good tactic. The other and more motivating tactic was that I was letting her know that other WKG riders were following her efforts and relaying support through the wonderful Facebook group. She couldn’t let them down now!

Nadja was incredibly impressive in finishing this race; it’s one thing to be ready in 3 hours but to carry one for over 5 and half hours of cycling is another. I am really proud of her finishing this brutal stage! Her efforts also earned her (and me) a knitted WKG beanie – Thanks Nadja!