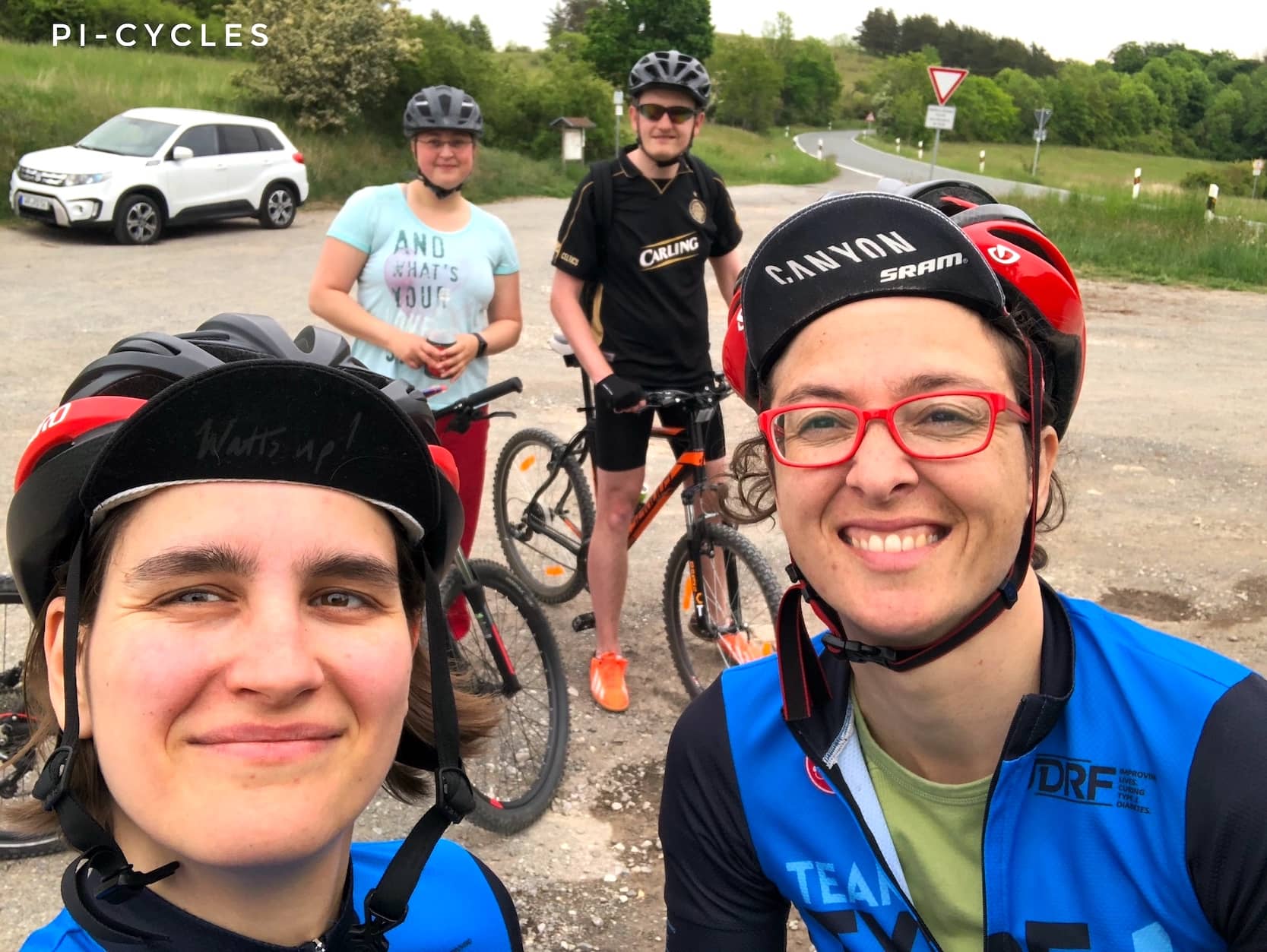 A long weekend and being allowed to travel safely meant that Nadja and I went to visit her grandmother who lives alone in the village of Timmenrode. This village is part of the Harz, an area in central Germany and part of the Sachsen-Anhalt (Saxony-Anhalt) and Niedersachsen (Lower Saxony) states. It also includes mountains, forests and a lot of historical towns. Luckily the weather was going to be clear enough for a cycle tour in some very different terrain to Berlin!

We planned on a mainly off-road tour with Nadja’s cousin Romy, and her boyfriend, Nils. They live in Bad Harzburg which is a 30 minute drive from Timmenrode. We packed Severus, the mountain bike, and Flash, the cyclocross bike, and drove to Bad Harzburg after breakfast. We would all then cycle together towards Timmenrode after which I would cycle solo back to Bad Harzburg to pick up the car and drive back to Timmenrode.

We cycled from Bad Harzburg and up our first climb that would take us into the forest of the Harz National Park. There we cycled on a fantastic gravel path that was also frequented by other cyclists. There were large patches of Bärlauch (Wild Garlic) that were very fragrant, but since they were blooming it was too late to harvest some. Plus there was the small matter of Nadja not liking anything garlicky!

Before long we reached the river Ecker which forms the border of Niedersachsen and Sachsen-Anhalt. This was also the border between East and West Germany where Niedersachsen was part of West Germany and Sachsen-Anhalt part of East Germany. In order to commemorate this former national border, there is a special Harzer Wandernadel Stempel (Harz Hiking Pin Stamp). These are stamps that are collected by hikers or mountain bikers by marking each stamp in a checkbook. There are 222 “normal” stamps located in the Harz and some special ones – like this one painted in the colours of the German flag to represent where the border between East and West Germany was.

We left the forest and headed into the town of Ilsenburg for a stop at the Forellenteich (Trout Pond). Although we saw some some very large carp in the Forellenteich! There were some lovely views of the mountains plus some very large fish in the pond! My blood glucose was very high at this point so I decided to inject 0.5 units of bolus insulin. I obviously had reduced my bolus insulin at breakfast too much. This is pretty easy to do when not eating the usual breakfast.

After Ilsenburg, we continued on the cycle paths running next to roads towards Wernigerode. Here we saw the Brockenbahn (Brocken Railway), which is a steam train that takes people up to the summit of the Brocken mountain – the highest peak in the Harz at 1141 m. It is a great mountain to cycle up but not during today’s ride!

We explored the old town of Wernigerode which has a very impressive Gothic town hall as well as some very pretty houses and shops too. After leaving the lovely old town, we cycled towards Benzingerode and noticed a conspicuous tower peeking out from the trees. This was the Austbergturm (Austberg Tower) which was a lookout town in the 13th Century and was restored in 2006 enabling people to visit and take in some amazing views.

We passed through the Ziegenberg (Goat Mountain) on a great cycle path that ended at a car park where we had a decision to make. Either head up to Hüttenrode (the hard route) or towards Blankenburg (the easy route). We were all feeling good so we chose the hard route. We all had something to eat before the climb ahead of us and I also injected some insulin as I was not happy with my blood glucose. It definitely needed to come down to safer levels but I gambled on insulin plus the efforts of cycling up to Hüttenrode to fix this.

We started on the road towards Hüttenrode but soon turned into the woods to take the off-road trail. We all set off at our different paces before regrouping at the top of the climb. This was quite strenuous and easily the hardest part of the ride. When I got to the top of the climb, there was a logger operating the crane of his large truck and a cute fox! The fox stared at me before darting off into the undergrowth before I could take a picture of it.

Once the others reached the top and felt good enough to continue, we reached Hüttenrode and also passed the Hüttenröder Zechenhaus (Hüttenrode Colliery House). This is the clubhouse committed to memorialising the history of mining in the area.

Next up was the riding downhill through the woods from Hüttenrode towards Cattenstedt. This was a lot of fun but since I was using a cyclocross bike without any suspension it was pretty tough. I made it safely without puncturing but my arms were pretty sore from all the bouncing around on the very uneven surface.

From Cattenstedt we made a detour to take in a hillside view of Timmenrode plus its famous Hamburger Wappen (Hamburg Coat of Arms) rock formation. We all made it to Nadja’s grandmother’s house where the others were ready for some coffee and cake. I had a quick coffee plus a gel and energy bar as my blood glucose was dropping a bit too much now.

I rushed through this break as it was starting to rain and I didn’t want to get drenched on the way back to Bad Harzburg. So without much further ado, I cycled through the woods of Timmenrode towards Blankenburg. Thankfully though the rain stopped once I reached Blankenburg and stayed away for the rest of the ride!

I passed through the old town of Blankenburg – an impressive town hall but lots of cobbled streets. Thankfully though I only needed to cycle up these streets as they can be pretty slippery when descending.

I cycled near the Mönchemühlenteich (Monk Mill Pond) before reaching the same car park from earlier where the big decision was made. From here on to Bad Harzburg I mainly followed the same streets as before. I stopped for some pictures of the impressive church in Benzingerode and the Kloster Drübeck (Drübeck Monastery).

The lovely gravel path between Ilsenburg and Bad Harzburg was definitely tougher this time round as now I had to cycle up some steep parts! But I knew that once I reached Bad Harzburg I could just coast all the way down towards the train station. I had noticed that the train station had stained glass windows so I wanted to check those out before cycling back up to the car. It was definitely well worth the stop!

That was the end of a great day and enjoyable group ride. Cycling in the Harz is always beautiful and worth the efforts of scaling the many climbs on offer. This was the first time that I cycled off-road here and I definitely plan on doing it again some time in the future.