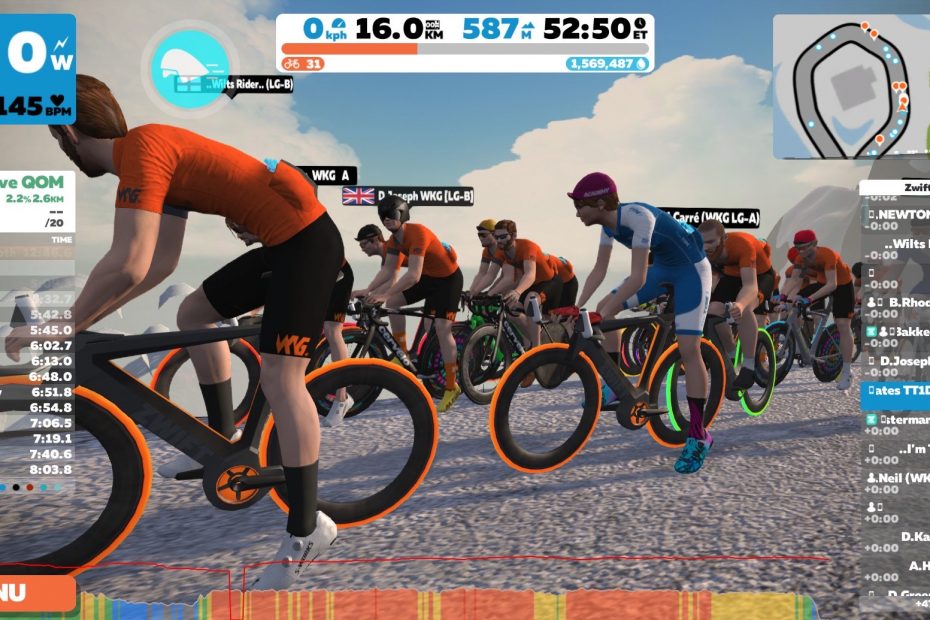 The WKG Winter League is back after a brief hiatus over the holidays with one of the fastest races that you’ll ever take part in. It’s a timed Strava segment that starts at the top of the radio tower goes down the epic KOM and ends at the bridge where the airplanes are. There are some little kicker climbs that break up the descent and call for maximum power.

When doing this race in last year’s winter league, I didn’t really try very hard as I knew that I wouldn’t get many points on this segment that favours heavier riders that can put out short bursts of large power. None of these things are in my favour. But I thought that at least I’d give it a go this time round.

Nadja and I prepared for the race with an early dinner and I warmed up by riding up to the radio tower. I lowered my weight on Zwift for this warm up so that I could get up the epic KOM and especially the radio tower (cruelly labelled as a “bonus climb”) faster than with my actual weight. I got to the top with 5 minutes to spare, corrected my weight and waited for Marcus to give us the “GO GO GO” signal.

Nadja chose the “Ride With Jane” option when I got to the top and was magically transported to the top of the radio tower without any additional effort. She did warm up by completing one lap of the Watopia Hilly route though.

Once the “GO GO GO” was given, the orange wave of riders started out with a gentle roll out before the madness began. I sprinted as hard as I could (about 450 W) before the radio tower descent and tried to keep with a group but everyone just wooshed past me. By the time the little kick before the left turn leading towards the main descent of the epic KOM came about I was already riding solo. This is the kiss of death in this race – you need to be with a group for maximum speed down the mountain.

I tried as hard as I could to catch up on the steep inclines but there was no chance of me catching anyone. So I soft pedalled the rest of the way down. Oh well.

Meanwhile, Nadja managed to stay with a group of C’s for the descent and was doing really well! She finished well ahead of me and fully deserved all the points that she got for this race. I finished dead last in the C category and got an extra 2 points to my league total.

Blood glucose management was not an issue during the race – it was only a 7 minute race for me and I was at the back! I had ridden for a bit over an hour during the afternoon to lower my blood glucose and reduced my bolus insulin before our early dinner. I did have an energy gel while waiting at the top of the radio tower as a precaution since my blood glucose was trending downwards from the warm up. These decisions proved to be right and I had pretty decent blood glucose values during and after the race.