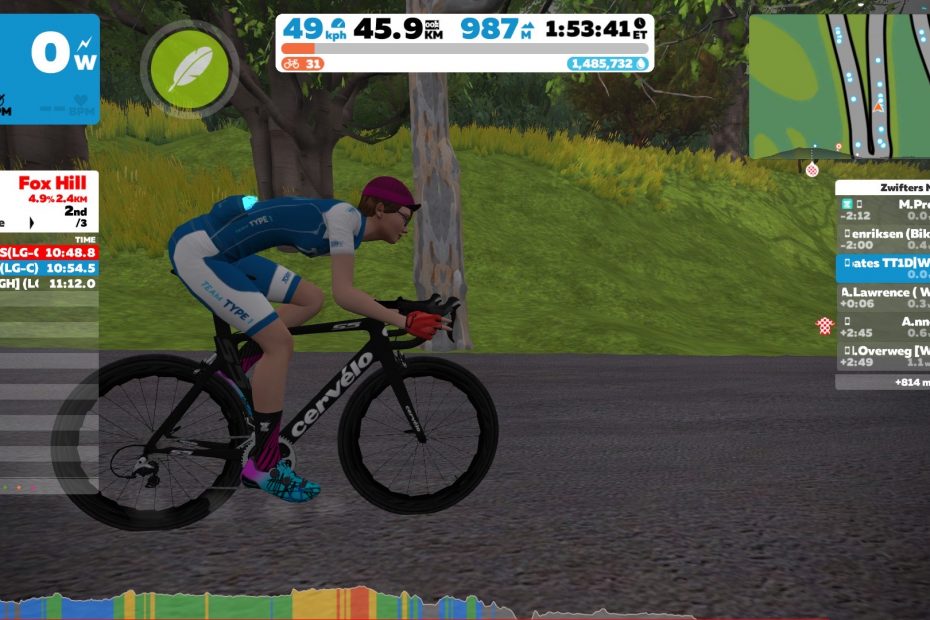 The last WKG Winter League race before the break over the holidays and it’s a tough one! This course goes over all four of the hills in the London world and since this is an event we get to do Fox Hill as part of the lead in as well as the final climb of the race – what fun indeed. This was also going to be a big test of my legs after my self-imposed break and also the three stages of the Grand Tour de Öffentliche Verkehrsmittel that I completed this week.

Blood glucose values were good overnight, despite having the usual CGM alarm waking me up in the early hours (this time at 5 am to eat something). I ate breakfast fairly late, about an hour before the race, so I injected half the required bolus insulin for breakfast and also lowered my basal insulin amount. I did this because the race would coincide with the peak amount of insulin in my bloodstream meaning I could easily get hypoglycaemia during the race.

I started the race pretty strong compared to the previous WKG League races that I competed in and even managed to get in a decent group right after the lead in. The plan was to try to stick with the group as long as possible and hold decent power on the steep Surry climbs while using the descents to rest as much as possible.

Leith Hill was the first official climb (Fox Hill sneaks in as part of the lead-in) on the list, it’s quite a drag of a climb with steep sections at the beginning and then again for the final 2 kilometres. I managed to stay with the group for most of this climb but got dropped during the final kilometre where my legs just couldn’t push any harder. The descent couldn’t come fast enough.

The next climb was Box Hill which comes as quite a shock to the legs. Immediately after a left hand turn from a relatively flat section the gears and legs need to work hard for the 7 % gradients of Box Hill. Steady pacing is key here and I managed to catch up with some members of my Leith Hill group. Some riders who were pacing their races well were also catching up with me and the rest of my group.

I lost some members of the group on the descent towards Keith Hill but I knew that it was more important to recover than keep pushing on the descent. Keith Hill is shorter than Leith Hill but steeper and here the legs were burning trying to keep a steady pace. Now the race was getting a bit lonelier and it was a case of defending my position rather than attacking to gain positions.

The descent gave some respite before the final climb of the race – Fox Hill – again another tough steep climb with steady gradients of 9 % for the most part. Again here I was only concerned with defending my position from Anne S. I think that my knowledge of the course helped because I knew that if I could save my legs during the gentler 4% gradients I could push harder for the final 9 % parts. This plan worked well and I managed to keep Anne S at bay. I was in a world of pain afterwards but this was the good kind of pain.

I was very pleased with my legs and blood glucose during the race. I needed an energy gel before Fox Hill but otherwise all was good. It was a great feeling to push myself without my legs and back giving up on me! Bring on the next races!

Nadja had very little motivation for this race and only decided 20 minutes before the start to take part! She did manage to get everything set up and was sitting on the bike a full minute before the start – an achievement in itself. She did forget her second water bottle and went to the kitchen during the first descent to get it. Her main thought was: finish this race so you don’t have to do the 4 Horsemen Stage (this course involves the original Hilly KOM, Volcano KOM, Epic KOM, and Alpe du Zwift). This was wise thinking as she got 27 points for finishing and moved up to fifth in the Category D League.