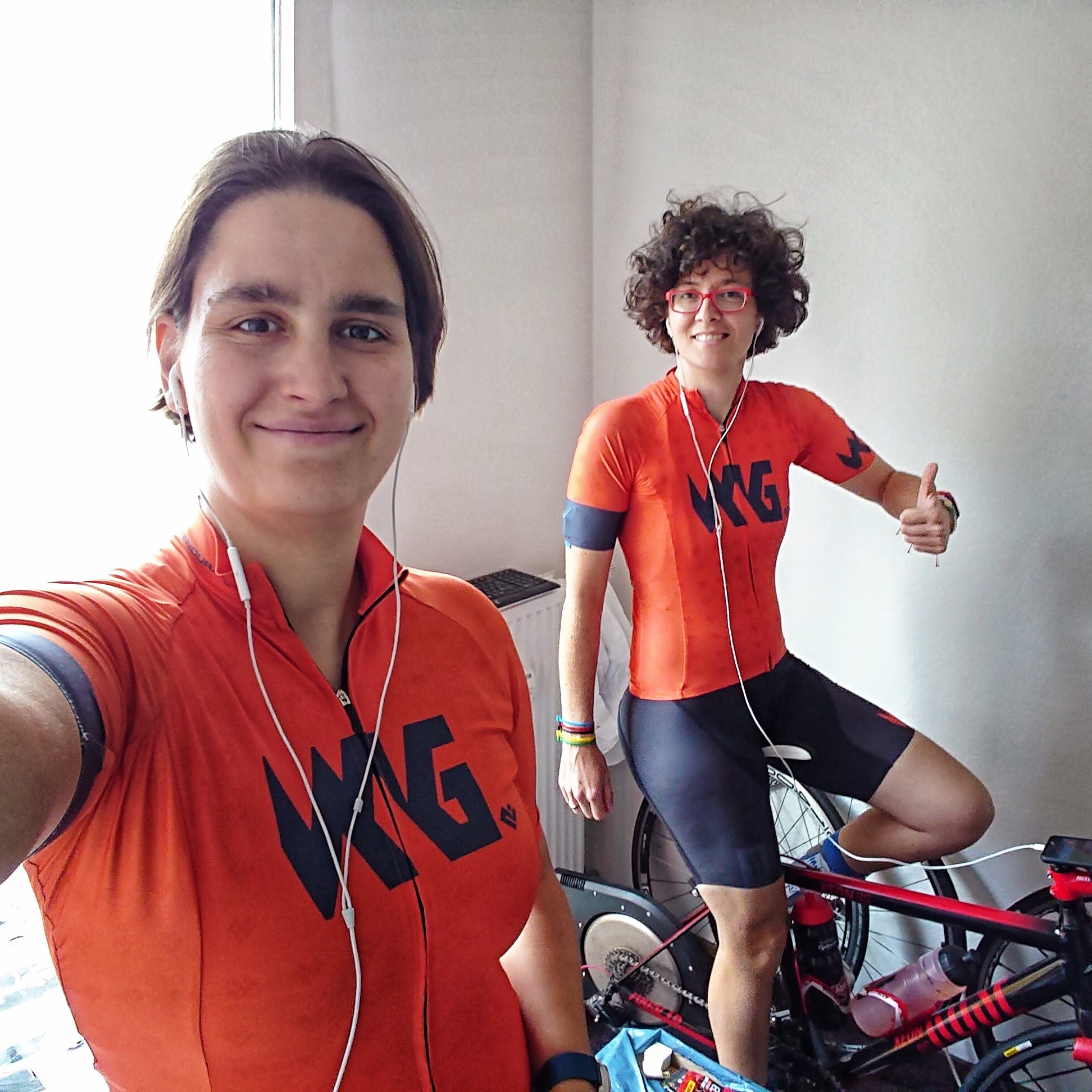 This was my first time doing the Bologna TT course. I was sick when this was officially added to the roster of Zwift worlds and never did it in the meantime. What I did know about the course was that it was fairly flat at the beginning and then ends with a brutal climb. I recall a funny GCN video where Dan Lloyd recces the course and notes how steep this climb is.

With all this in mind, my tactic was start hard but not too hard and prepare to dig deep for the climb. I certainly kept that in mind but I definitely started too hard and couldn’t sustain my effort up the climb. My power numbers were certainly higher at the start than at the end – the numbers backing up what my legs & lungs were telling me: YOU STARTED TOO HARD!

I knew that because this was a) the first league race and b) a TT, that only superb times get decent points. So I got the minimum amount of points (3 since this race had a 1.5 point incentive) for the maximum amount of effort. Oh well. Till the next round.

My blood sugar was also strangely stable at the higher blood glucose level that I started the TT at. Given the amount of aerobic effort needed for such a race, I would’ve expected a strong decrease with the sustained TT effort but nope. This didn’t really help as I was counting on that so that I could’ve boosted my system with a gel. Double hmpf.

I was looking forward to this race. In a previous edition of the WKG league, I had one of my best races on this very course (or was it the 3 Sisters course?). What I did then was start strong, stick with a group until the start of the epic KOM and then keep on the power for the 25 mins or so till the top, to drop as many people as possible. Hang on the descent and through the jungle and the rest of the Watopia flats till the end.

I wanted to replicate this. I failed miserably. I started strongly and stayed with a group till the bridge before the climb proper. I lost them while wiping sweat away from my face. But really this was just me getting dropped sooner rather than later as I was really struggling from here on. I started out over estimating the power (again!) that I could hold up to and over the epic KOM climb. I may blame my blood sugar for this as just as the week before, it stayed much too high (> 210 mg/dL) for most of the race. Only 3/4 of the way through did it even start dropping – this is not normal!

To add insult to injury (and the pain from starting too fast), I managed to get my headphones stuck in my cranks while towelling sweat again. Lesson learnt: take care when using a towel, even though it is compulsory! I had to dismount to free the headphones and in a fit of rage tried to throw them on the food storage between our Zwift setups. But true to the race, I failed at this and they landed on Nadja instead! (Sorry but glad they didn’t disturb your race!)

I must be more realistic about what power I can hold for future races as it’s definitely not what I think it is at the moment!

I sat this race out as

Turned out to be a good decision as the Critical Sloths (pub quiz team) finished in fourth place.

Looking forward to racing the new Titans grove extension, it’s a nice lumpy course that I quite like. Unfortunately Zwift had other ideas. 4 minutes into the race, Zwift crashed. Like really crashed. I had to restart Zwift and it hadn’t saved the 4 minutes of (unspectacular) racing. I was far from the only person hit by this – many other C Category folks (including our fearless leader Marcus Neil) were chucked out of the race.

Nadja was not affected so after I logged back in, I rode for another 1hr 25 mins to keep Nadja company in the pain cave and lower my blood glucose. My levels were a bit elevated before the race to counter the expected decrease from the Zwift race. While I was riding along, I was keeping Nadja up to date with all the Facebook chat from all the riders that were kicked out of the race.

Ah the One 11, the ‘highlight’ of every WKG racing league. 12 (!) laps of the Watopia hilly route. Each time up the KOM gets a little bit steeper – I swear! This is also a race where if you can finish, then you’ll get a fair few points. So JUST KEEP PEDALING.

I had a terrible night leading up to the race, blood glucose levels well about 250 mg/dL. I over-corrected at about 2:00 and woke up 2 hours later to eat something. But this wasn’t a normal night-hypo. I felt strange when I got to the kitchen and really weak. I could barely chew the cereal bar and then I could barely stand up. I had to lie down on the kitchen floor until I felt strong enough to get to the sofa. I didn’t have the energy to call and wake Nadja up for some help. But I managed to sleep on the sofa, and then went back to bed for more sleep.

So after that experience, I woke up with very high blood glucose (> 250 mg/dL). I was unsure of how much to inject for breakfast before the race which started at 12:00. Normally I would inject half the amount needed for breakfast since my insulin sensitivity is very high in the early afternoon. But what about the extra insulin needed for correcting my current blood glucose levels? I decided to err on the side of caution and injected the full amount for breakfast and a small correction amount.

Not good. 300 mg/dL not good. Normally I would start my warm up earlier to increase my insulin sensitivity but since I had 4 hours on the indoor trainer ahead I wasn’t too keen on this. Nadja had the great idea that I should go out and run instead, so I did that. This didn’t really have the desired effect, so I knew I needed to check for ketones before making the decision to race or not. Ketone level was clear, so the race was back on.

I started slowly and rode at a steady pace – solo – for the first 6 laps. Then I caught onto a group of C’s as they were lapping me (a very painful experience, as this is the group I would’ve ideally stayed with the whole race) and stayed with them until they finished. Marcus Neil was part of this group when I first latched on but he got dropped due to cramp. I cannot recommend watching his vlog about this enough – it’s utterly hilarious and astonishing how much he suffered with cramp in so many different places (WTF is groin cramp?!?!).

By the time the rest of the group were on their final (and my penultimate) lap, we rode past poor suffering Marcus. Which was great news for me since I would increase my points haul. And by this time, I was feeling better and my blood glucose was well within range. I could even go ahead with my planned nutrition of eating an energy bar every 1.5 hours.

Up ahead were direct competitors in the C league, and I saw that I was holding better power than them. So I powered on through the final lap, dropping the second of the two riders up the final KOM climb and comfortably held on till the end. This felt really good given my ordeal leading up to and into the race.

Best league race for me so far!

My first time racing on the Yorkshire UCI course. I reccied this course on Monday to see what’s like since it’s fairly lumpy. And boy, is it lumpy! The climbs are fairly long and steady and the descents aren’t long enough to get much rest. So it was going to be a tough, tough race.

My tactic was not to sprint off at the start and try to catch as many people as possible on the climbs. This worked REALLY well on the first lap. But once the incline at the start stopped, I couldn’t see any other C’s that I could catch. I was trying to drop some D’s and I really paid for this by the end. I was feeling pretty pooped by the end of the first lap, especially as I was solo for the majority of it.

The best I could hope for in the second lap was to keep the effort up and not lose any more places (I was pretty far back in the C field). I caught up to a D on the first climb but he decided to push back and dropped me before the first incline. I don’t understand this tactic, we would’ve both been better off working together.

This bit both of us on the bum as a group of D’s were working together catching all the deadweights, me included. I was caught on the KOM incline, tried to stay with them but completely blew up. My legs just said NO! The hardest of nos actually. I had to soft pedal the rest of the distance.

I was also really struggling with back pain and was worried about cramping out at multiple points. Thankfully this didn’t happen but I could barely stand up after the finish. Looking back I was not rested enough after the One11 and the Giro de Rigo (132 km) the week before that. I rode up the Alpe with a friend on Wednesday, it may have been an easy tempo but the legs were not happy with that. Thursday was World Diabetes Day and I signed up for a 2 hours stretch in the 24 hour relay that Team Type 1 organised. I only completed 1 hour as my legs were just too tired.

All in all, I got what I deserved for not recovering properly – the 2 points for showing up.