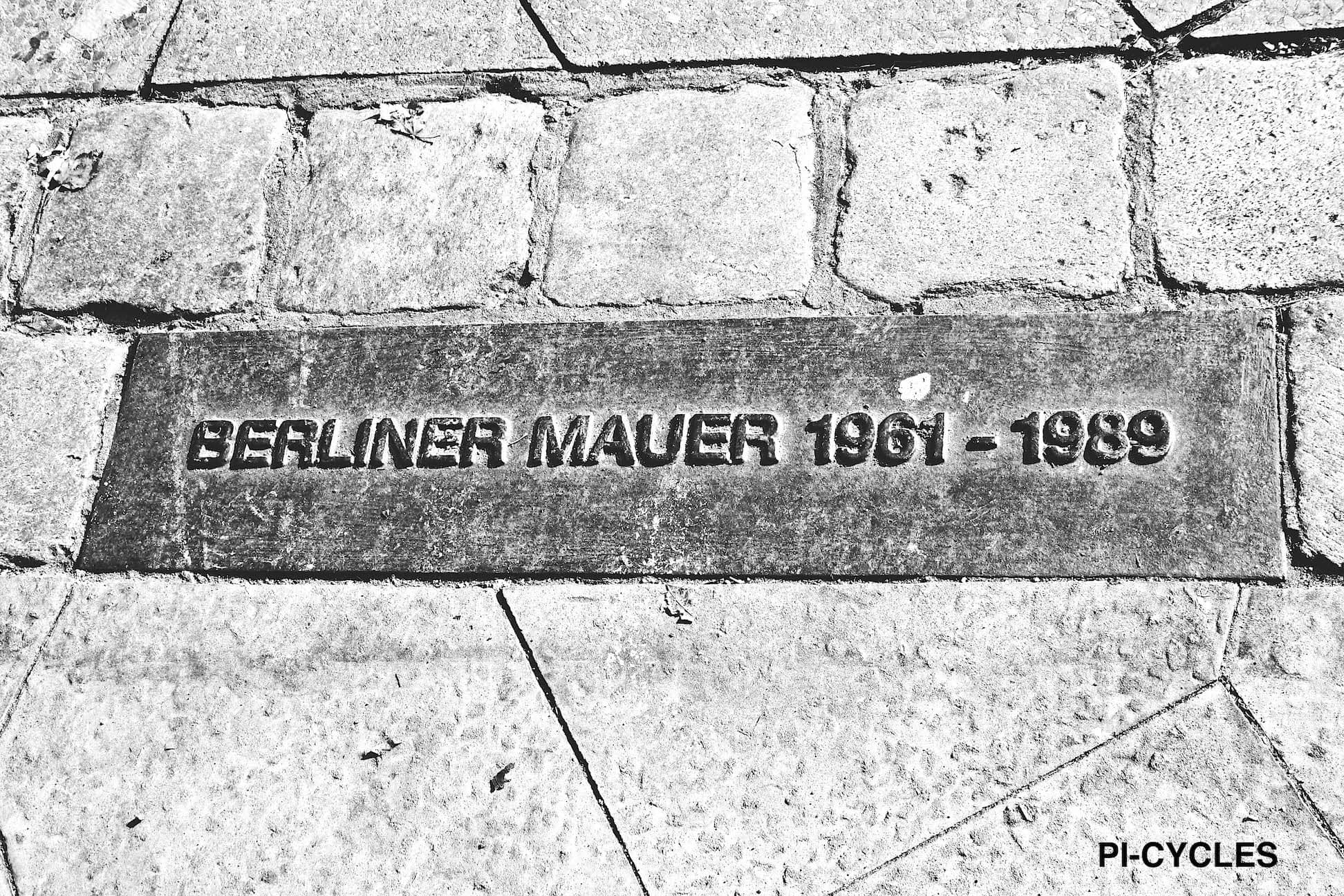 Cycling the path of the Berlin Wall without looking into its history seemed a bit moot. So here is a brief history of the 28 years that the Berlin Wall stood plus the efforts to create the trail and follow this infamous piece of modern history.

Growing up in England and Malta (part of what we call “the West”), I had certain ideas of West Berlin that completely changed once I moved to Berlin. The biggest of which was that the people of West Berlin were freer than those in the East despite the fact that West Berlin was cut off from the rest of West Germany by a huge concrete wall! I now think it’s more complicated than that.

There is so much history in this city and it was a microcosm for the wider Cold War going on after the Second World War. So I’ve summarised all this to provide some context for my experiences cycling the Berliner Mauerweg (Berlin Wall Path).

History of the Berlin Wall

After the Second World War, Germany and Berlin were divided into four quarters belonging to each of the four Allies (France, United States of America, United Kingdom and the Soviet Union). Almost immediately, it was clear that the Soviet Union had a different agenda for Germany. The non-Soviet Allies wanted a prosperous Germany and heavily invested in quickly reinvigorating West Germany’s economy through the Marshall Plan.

This was not the Soviet’s plan. Stalin preferred keeping the economy stifled so that East Germany would remain dependent on Moscow. The GDR (German Democratic Republic) was formed, though never recognised by the Western Allies, and was ruled as a one-party state.

Not surprisingly, the citizens of East Germany were not happy with this arrangement and many thousands fled to the West. This led to the inner German border between East and West Germany being erected in 1952. This reduced the number of people in the East German states easily crossing into the West, however in Berlin, it was just a matter of crossing into West Berlin and defecting.

The East German government was not happy with this Berlin loophole as most of the immigrants were young and academic – leading to a “brain drain”. The Western Allies knew that the East Germans were looking for a way of plugging this drain and rumours of a barrier being built were around. A famous interview with Walter Ulbricht, the GDR state council, stating in June 1961 (two months before the Berlin Wall was erected) that “Niemand hat die Absicht, eine Mauer zu errichten!” (No one has the intention of erecting a wall!). A very famous quote that is still in public consciousness.

On 13th August 1961, the border between West and East Berlin was closed – first by barbed wire which then evolved into a heavily fortified barrier consisting of two barriers of concrete over 3 m high. Between these walls was the heavily patrolled and armed “death strip” which included 302 watchtowers. Now West Berlin was an exclave of West Germany surrounded by East Germany.

The GDR branded this new border as an “Antifaschistischer Schutzwall” (Anti-Fascist Protection Rampart) erected to protect the East German citizens from the facist elements of Western capitalism. On the other hand, the West Berlin mayor, Willy Brandt, called it the “Wall of Shame”.

The Berlin Wall made it extremely difficult for East Germans to defect to the West – but that never stopped people from trying. There are countless tales of inventive ways of escaping including driving a tank through the wall, driving a train through the wall, hiding in cars, gliding, jumping out of windows, swimming across the waterways like the river Spree and digging tunnels.

The East German border guards were ordered to shoot at anyone (even children) seen crossing the border into West Berlin. At least, 140 deaths resulted from attempting to cross the Wall. The total number is not known because these deaths were the responsibility of the  Ministry for State Security or Stasi, the official East German state security service.

After reunification, there were trials of both the border guards who killed people attempting to cross the border and also higher officials who gave these orders. In fact, the former East German leader, Erich Honecker, was indicted for mass murder but wasn’t brought to trial because of his failing health. He died in exiled in Chile in 1994.

In the autumn of 1989, protests in the Soviet bloc (Poland and Hungary) spread into East Germany – first in Leipzig and then East Berlin. In a press conference the GDR spokesman, Günter Schabowski, unintentionally indicated that any East German citizens wanting to cross into the West would not be stopped. So that same night (9th November), many East Berliners gathered at the Wall and after initial hesitation, the border guards opened the border and the East Berliners were greeted with champagne and flowers in the West. With the border police gone, people congregated at the concrete wall and started tearing it down.

Given how ubiquitous the Berlin Wall and its watchtowers were, it is now quite difficult to find remaining pieces of it. The East Side Gallery, Bernauer Straße memorial, the Topography of Terror near Checkpoint Charlie and a small section in Groß Glienicke are the only places in Berlin where large stretches of the original Wall can be found.

Since 1991, environmentalists and bicycle activists campaigned for the path of the former Wall to be available to the public as a hiking and cycling trail. It took a long time for this to be official – the full path was only completed between 2002 and 2006!

Due to this long delay, houses were built in areas where the Berlin Wall ran, plus the train tracks between Berlin and Halle were rebuilt after German reunification. This meant that the Mauerweg couldn’t run exactly along the path of the former Wall and so some detours were necessary.

Along the route there are information posts commemorating each of the known people that died trying to cross the Wall. Plus other posts, outlining some of history related to the Berlin Wall. Such as at Eiskeller with the boy who was escorted to school by British soldiers.