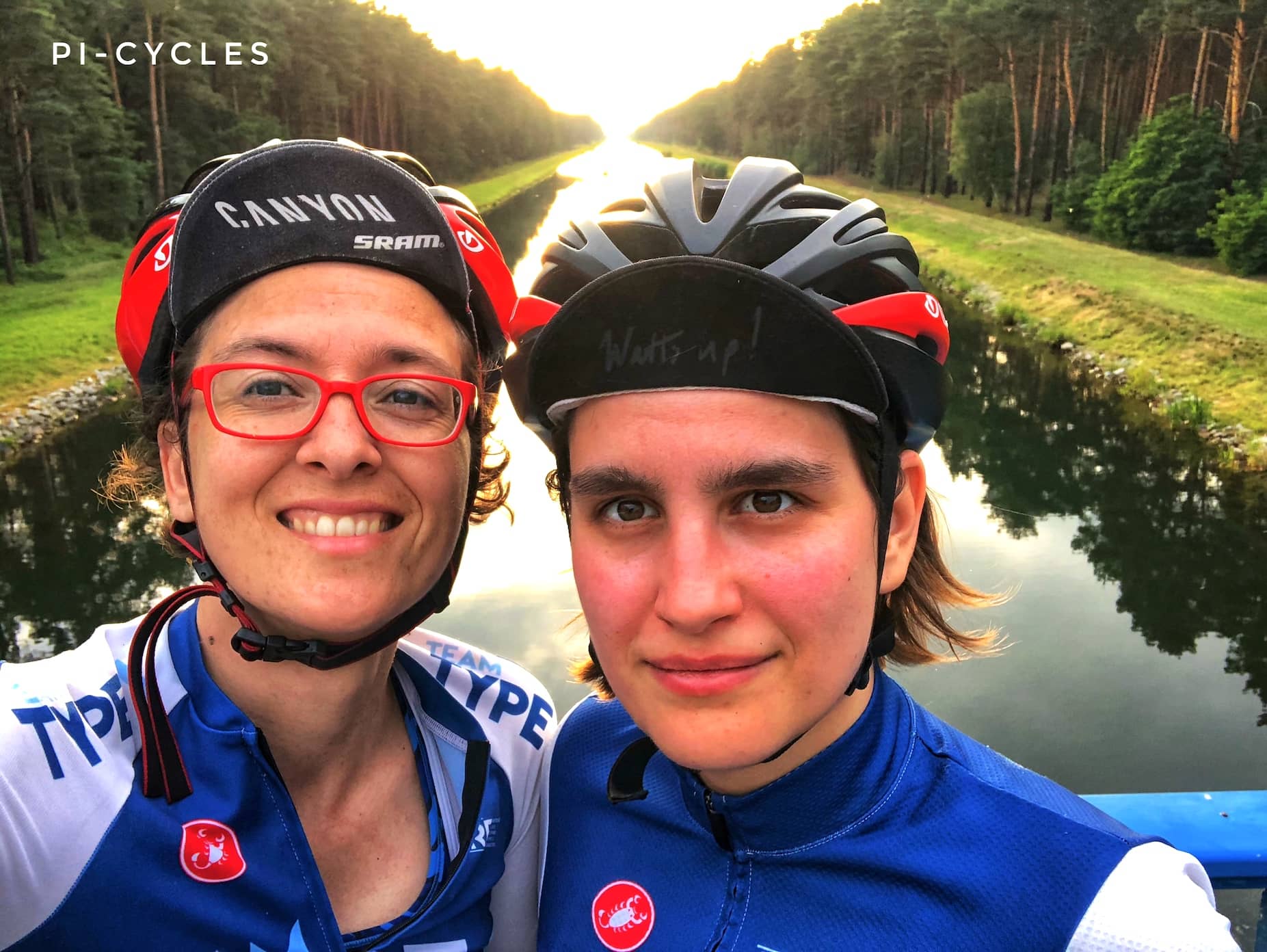 Nadja and I spent a long weekend in Groß Lindow, a town in Brandenburg near the German-Polish border, to celebrate the birthday of Nadja’s mother. Pi came along too – he loves a road trip – and we also took bicycles so we could explore the area.

In the morning, we went swimming in the beautifully clear Katjasee (Katja Lake), which is a smaller section of the Helenesee (Helene Lake). This a beautifully clear lake – the second deepest in Brandenburg – and it was formed after the flooding of a former open-pit mining. We planned on cycling around the whole Helenesee as well as the Großer Müllroser See (Greater Müllrose – or Greater Trash Rose – Lake) later in the afternoon, as it was too hot for cycling right after lunch.

So after Kaffee und Kuchen (Coffee and Cake), one of my favourite German traditions, we got ready for some cycling. I reduced the amount of bolus insulin for my cake pieces – including a very yummy piece of a Lemon Meringue made by Nadja – because of the imminent cycling. This did mean I started with very high blood glucose, but I hoped that the exercise would eventually lower my blood glucose levels.

We started by cycling along the Friedrich-Wilhelm-Kanal (Frederick-William-Canal) in Groß Lindow. This was the first canal (built in 1668) connecting the rivers Spree (in Berlin) and Oder (the modern-day border between Germany and Poland). After the industrial revolution, this canal was too small for the increased traffic so the larger Oder-Spree-Kanal (Oder-Spree-Canal) was built in 1891. I had first cycled along the Berlin section of the Oder-Spree-Kanal during Stage 23 of the Grand Tour de Öffentliche Verkehrsmittel.

Nadja and I made our way through the pine forest up to the Katjasee. Our swimming spot from earlier was a lot busier than in the morning! We continued on forest trails trying to stay as close to the lake edge as possible. This worked well until we reached a locked gate near the Helenesee.

Before reaching the locked gate, I managed a spectacular fall over the bars! A piece of wood from the forest got swept up into one of my wheels and jammed it. I fell onto the soft sandy floor and both me and Flash were fine.

The gate separated the first of many FKK (Frei-Körper-Kultur, or free body culture) beaches for nudists. This is very common in Germany, especially in former East Germany – which Brandenburg was part of. We tried to circle around the FKK area using trails indicated on our Wahoo GPS devices as we would now be deviating from the set route. This eventually led to sections of uncycleable forest where we had to push our bikes over rough forest ground and dense trees. We were so happy to finally reach a proper trail!

We made it into another section of the pine forest to get to the Großer Müllroser See. At this point it started to rain, which was nice and refreshing after the heat and humidity of this heatwave. We crossed the Oder-Spree-Kanal using a lovely bridge for cyclists and pedestrians.

On the way to the town of Müllrose, we made a little detour to the lovely Katharinensee (Katharina Lake). Not exactly planned, but it sure was picturesque. We first came to the Seepromenade (Lake Promenade) on the northern banks of the Großer Müllrose Lake and then continued first through the old town of Müllrose before following the banks around the lake.

As we reached the southern shore of the Großer Müllroser See, the sun was starting to go down which made for some lovely scenery. But it also meant that there were plenty of mosquitos around – the photo stops had to be much shorter to avoid being bitten too much. Nadja was especially careful to keep on moving as she is a favourite meal of mosquitos.

We crossed the river Schlaube and once we got to the banks of the Großer Müllrose See again, I saw a beaver in the water! I’ve never seen one in the wild before so I was very excited. It was pretty shy and scooted off before I got too close – wise behaviour to avoid humans. I also ate an energy bar here to boost my blood glucose levels for the remainder of the ride. The cycling had worked properly after the cake carb-loading before we set off!

Once we got past the lakeside camping site of the Großer Müllrose See, it was time to head back towards Groß Lindow. Along the great cycle paths in the woods, we passed by the historical border (up to the 19th Century) between Prussia and Saxony and then a restored settlement of woodcutters including an example of a Hillebille.

The Hillebille is a wooden percussion instrument – where a wooden mallet is beaten on a wooden plank. This was used as a means of communication by the woodcutters – either a warning or just a simple working day is over call. Nadja demonstrated this very well and this could be heard echoing through the forest. The word is also the root of the term “Hillbilly”, a non-pleasant way of referring to rural people in the USA.

We reached and crossed the Oder-Spree-Kanal before making our way to Groß Lindow, where we were greeted by a hungry Pi. This was a lovely tour in some great forests and around beautiful lakes, the only negative being the detour where we couldn’t cycle at all. This looks like a fantastic area for cycling, so I’m sure we’ll be back for some more adventures.