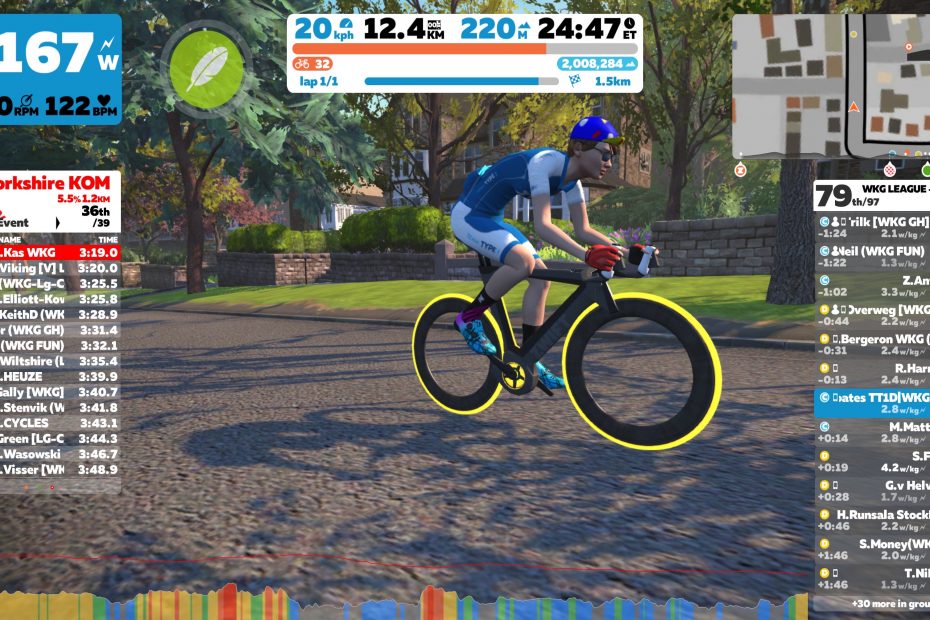 The second part of double-header after Stage 20 of the Grand Tour de Öffentliche Verkehrsmittel was upon me: A short mass-start individual time trial. This is possible as Zwift can turn off the draft feature in events meaning that recovering in a group is not possible. My blood glucose was quite high (> 200 mg/dL) after eating some yummy falafel after Stage 20 and didn’t budge, so I injected a small amount of bolus insulin about 1.5 hours before this Stage.

I had no idea how my legs would be for this short but lumpy course so I would just see how I felt at the start and take it from there. After a brief and light warm-up, I started full-gas and was feeling pretty good! I was doing really well up the long draggy climb that starts the course and managed to keep up the pace on the “flat” (read up and down) section before the longer and steeper KOM climb around the halfway point of the course.

I find these mass-start TTs really tough as you can see in real-time how you are doing compared to other riders. Also the motivation of catching the rider ahead just pushes you a little more – or at least it does to me.

Just before the KOM climb, I paid for my efforts big time. My legs were not cooperating and my CGM alarm also informed me that my blood glucose was dropping fast! I had an energy gel for the fast acting sugar boost but this was not going to help my performance, it was only to get my blood glucose within range. This meant that I soft-pedalled round the rest of the course but finished safely. Despite this I was happy with my legs for the most part since this was quite a strenuous day.

Next to me, Nadja was aiming on having an easy time trial and not looking to put out any big efforts. Those thoughts were scuppered when Caroline Winters showed up on her screen, coming seemingly out of nowhere,  and Nadja’s competitive instinct kicked in big time! She put down the power and finished ahead of Caroline – even dishing out the pain since Caroline mentioned that she cramped up. Hope all is well Caroline!

This turned out to be my final Stage of the WKG Winter Racing League! Big thanks to Marcus for organising the league and coming up with great racing courses (except the Four Horsemen 😉 ). Also thanks to the points team that take care of the allocating the points to all the racers – you guys do a great job. And finally thanks to everyone from the WKG that took part in the racing – the banter while also competing hard it just fantastic!