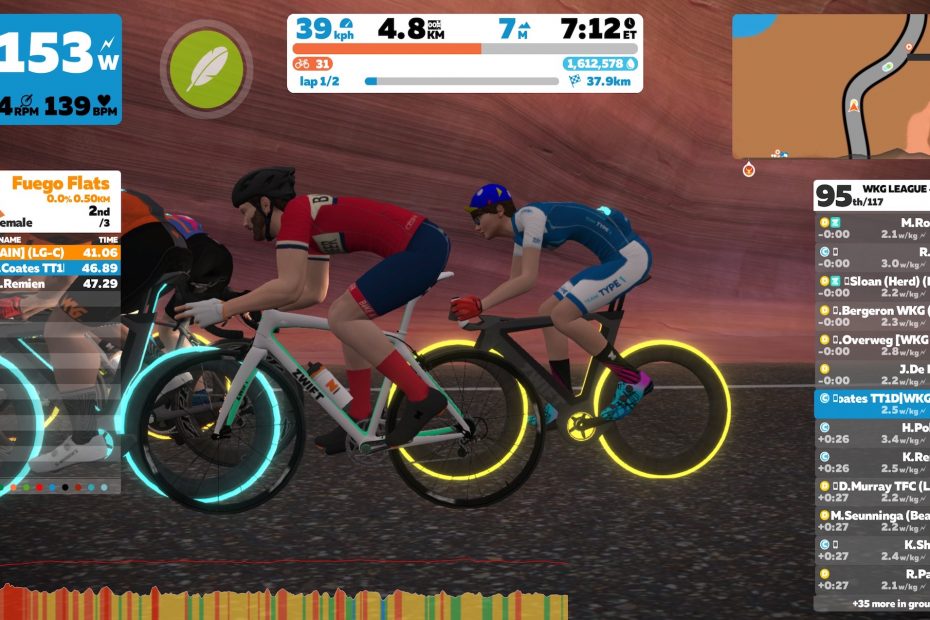 The latest race of the WKG Winter League was one to look forward to – 2 laps of the equally flat and lumpy Sand and Sequoias route on Watopia. This route features the pan flat desert route (aka Tick Tock) before heading into the Titans Grove for a lot of up and down without any huge climbs. Drafting is key for the flat desert sections as there is no way that a solo rider could chase down groups of riders. So that was my plan heading into the Stage, draft draft and draft some more before the inevitable splits during the Titans Grove sections.

With the Stage starting at 20:00, I decided to have a large lunch and then a smaller meal about 2 hours before the start. My reasons being that I can’t race after eating a large meal but also to avoid injecting a lot on basal insulin for such a large meal which would then lead to a huge drop in blood glucose once the racing started.

Pre-race meal planning was sound but I forgot one thing – I needed to change my CGM sensor which meant a 2 hour window of no blood glucose readings from the sensor while it warms up. Ideally, I would’ve changed the sensor (with the help of my trusted Nurse Nadja) about 3 hours before the race but I forgot and we only got the new sensor attached about 1.5 hours before the race.

Riding without CGM readings meant that I would have to check my blood glucose levels old school style via blood sacrifice on test strips. Thankfully when racing on Zwift, this is easier than in real life as I can do the test while riding but it does require a lot more faffing about. Plus with less frequent blood glucose values, I would have to judge how the blood glucose was trending and the current effort levels.

A few minutes before the start, my blood glucose was on the lower side for the start of a fast race demanding high effort levels so I ate 4 dextrose tablets to make sure that there would be enough sugar for the start. I then planned on blood sacrifice every 15 minutes until my CGM finished warming up and I would have 5 minute readings direct on my phone.

After the start, I managed to find a group consisting of the lead competitors in the D category and I happily stayed in their draft until we caught the next group up the road. I was now in a huge group of C and D cat riders for the whole flat section of the first lap. This group stayed together until the start of the Titans Grove section, and here I managed to stick with the front part of the group – plan working! I checked my blood glucose for the second time after the Titans Grove KOM and needed to take on an energy gel since I was happy with how my legs were feeling and knew I really needed to push to stick with this group. I definitely did not want to get dropped before the flat section.

It took a lot of effort to stick with the group on the remaining part of the Titans Grove sector but I managed it. Thankfully the group settled down once we were on the flat Tick Tock sector rolling on into lap 2. I did have a moment when I was checking my now-functioning CGM readings where I momentarily lost the group but a quick and painful effort meant I could catch up with them.

Lap 2 played out similar to the first lap, where the group split again once we hit the Titans Grove. I tried to stick but my legs were saying nope. I decided to let the group go since there was no danger any other WKG C cat rider was going to catch me. I was happy with my effort and how the race panned out for me, also 9 points is a decent haul of points although it is looking less likely that I can move up in the league table.

Next to me Nadja was cycling with virtual Olaf. He is also a D cat rider and we have met him IRL. He has even had the honour of meeting Pi! Pi inspected his apartment thoroughly when we met up in Hamburg for the Cyclassics last year. Nadja and Olaf were working well together as the ride’s unofficial broom wagon, meaning that neither had to cycle alone – which is never fun! They were also chatting via the Zwift app so it was like a proper group ride and made it much more enjoyable for Nadja, especially as she wasn’t too happy with her legs.